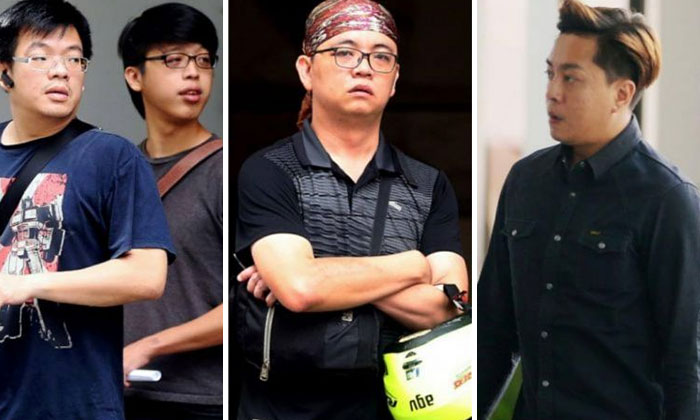 Four motor scooter riders were sentenced to jail on Monday (April 30) for assaulting an Argentinian whom they had a dispute with after one of them collided with him in Bishan Park 1 on the night of Feb 10, 2017.

Prior to that, the four riders had shared four bottles of beer at a coffee shop, reports The Straits Times.

Mr Griffith raised his arm to signal for them to stop so he and his wife could cross at a traffic junction, but they rode past the two, with the final rider, Ng, bumping into Mr Griffiths’ arm.

Ng, enraged by the collision, confronted Mr Griffiths and an argument broke out, during which angry words were exchanged.

Ng then rode away and later told his friend what happened.

The four decided to look for Mr Griffith to settle the score and caught up to him 10 minutes later.

Ng shouted at Mr Griffith, and the latter said that he would call the police.

Tan suddenly ran towards Mr Griffiths and punched him in the head three times.

Mr Griffiths tried to escape, but the other three riders caught up with him and rained blows on him.

They punched and scratched him until he eventually broke free and called the police.

Tan also kicked Mrs Griffiths’ leg, causing her to fall when she pleaded with them to stop.

The four then fled, but in the process, Tan had dropped his phone at the scene.

Mrs Griffiths recovered Tan’s phone and handed it over to the police.

Tan later tried calling his own number, and a police officer picked up.

“ When Tan called his own mobile phone, a police officer answered. Tan subsequently returned to the scene... and he was identified as one of the assailants in this case by the victim.”

The four riders were promptly arrested.

Mr Griffiths suffered bruises on his head and left shoulder from the scuffle.

Ng and Leong were jailed for a week, while Tay was sentenced to two days in jail.

Tan, a Malaysian, was given two weeks’ jail and a second assault charge for kicking Mrs Griffith was taken into consideration during sentencing.

He was offered bail of $5,000 so he could settle his personal matters before serving his sentence.

Tan must surrender himself to the State Courts on May 14.