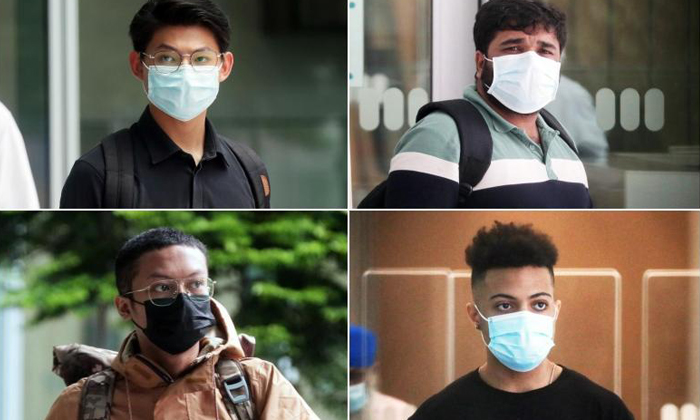 Four more people linked to a New Year's Eve gathering at Clarke Quay were charged in court on Tuesday (March 22).

Varghese, Adam and Assiddiq faced charges for failing to keep a 1m safe distance and not wearing a mask.

Lee, who also faced a charge for failing to keep a safe distance, was also charged with attending a gathering comprising more than five people to record footage of street interviews near the Read Bridge, outside Riverside Point, at midnight on Dec 31 last year.

Lee was represented by Mr Tan Kah Tian, who asked for two weeks to make representations for his client. Lee's next date in court will be on April 19.

Varghese and Adam, who did not have a lawyer, indicated their intention to plead guilty. Varghese will return to court on April 12 and Adam on April 19.

Assiddiq, who was also unrepresented, indicated he wanted to claim trial, saying that he had not intended to commit the charges against him. He will return to court on April 6 for a pre-trial conference during which he can present evidence and witnesses to support his case.

With the four charged on Tuesday, 14 people have been taken to court in relation to the same incident, the Urban Redevelopment Authority (URA) said in a statement on Monday.

Ms Lim Shu Yi, the lawyer of Kotra Venkata Sai Rohankrishna, who was one of those charged earlier, was in court on Tuesday and indicated her client would likely be pleading guilty.

Kotra's next court date is on April 12. He faces charges that include allegedly attending the gathering in a Spider-Man costume with three others and interacting with about 20 people.

URA added that another three people have been served notices of composition of a $1,000 fine each, bringing the total number served with such notices to 19.

The incident, which was captured on video and uploaded on social media, is believed to have involved hundreds in a spontaneous countdown party in front of Riverside Point.

The multi-ministry task force tackling the Covid-19 pandemic said in January that the gathering had led to blatant breaches of safe management rules, calling it a potential superspreading event.

Videos show the rowdy crowd cheering, singing, celebrating and counting down to the new year.