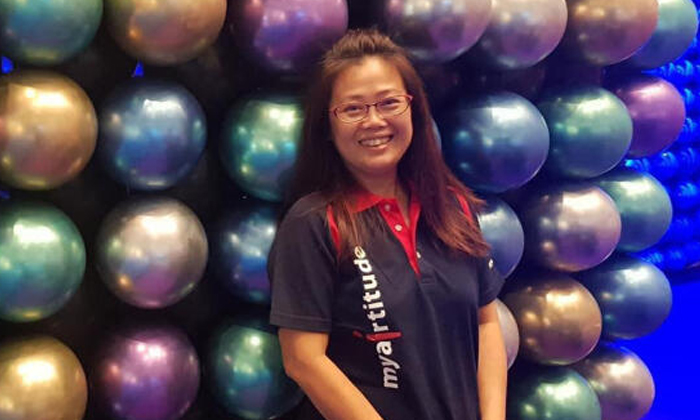 When a lorry driver approached a T-junction, he slowed down but did not stop to make a right turn, failing to notice a woman who was about to step onto a pedestrian crossing.

The driver, Gan Lian Min, 70, was on Friday (Feb 11) sentenced to four months' jail for driving without due care and causing her death.

He has been disqualified from holding or obtaining all classes of driving licences for eight years after he is released from jail.

The New Paper reported in January last year that Ms Or, a pre-school teacher's assistant, was on her way home after buying sushi to surprise her son and celebrate his O-level results when the incident occurred.

On Friday, Gan lowered his head as closed-circuit television (CCTV) footage of the incident was played in court.

It showed his lorry slowing down before making a right turn and crashing into the woman who was holding an umbrella as she crossed the road.

The court heard that the incident happened at about 8.30pm on Jan 12 last year, when Gan was heading to the non-signalised T-junction of Yung Kuang Road and Yuan Ching Road in Jurong West.

Gan made a quick scan for oncoming traffic before making a right turn and slowed down but did not stop, said Deputy Public Prosecutor Sheldon Lim.

At the same time, Ms Or began crossing the road.

Even though it was raining, visibility was assessed to be fair.

Gan called the police and Ms Or was taken to hospital where she died on Jan 15 last year from head injuries that were consistent with a motor vehicle collision.

Gan's lawyer, Mr Clarence Lun from Fervent Chambers, called the incident an unfortunate one and noted that it was raining heavily and dark.

"(Gan) has lived in remorse throughout this entire period," said Mr Lun, who added that his client attended Ms Or's wake and apologised to her family.

DPP Lim said the CCTV footage showed that she was visible and holding an umbrella. He added that if Gan had stopped, he could have noticed her crossing the road.

For driving without due care and causing death, he could have been fined up to $10,000, jailed for up to three years, or both.