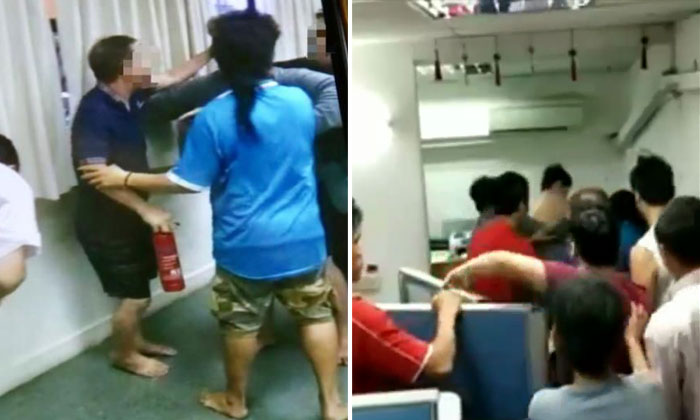 Four men were arrested after a fight broke out between a debt collector, a stall owner and his workers in Pasir Panjang on Friday evening (Jan 4).

The police were alerted at 7.02pm to a case of affray at 24 Wholesale Centre.

According to Shin Min Daily News, the scuffle started when two debt collectors from Majestic Debt Recovery came to the vegetable and fruit stall to collect a debt of $6,800.

The owner of the debt collecting company Makko Poh, 37, said he had sent two of his employees to the wholesale centre to chase the stall's owner for money that had been owed for at least four months.

According to Mr Poh, his staff identified themselves and their reason for being there but the stall owner became increasingly agitated.

He then began to attack one of the debt collectors and called his employees to join in.

Although some videos of the incident were posted on Facebook, most of them were taken down.

One of the videos reposted on SG Chinese Community Club's Facebook page showed a group of more than 10 men surrounding one of the debt collectors and shouting.

The video also included photos showing police officers escorting men away from the wholesale centre with their hands behind their backs.

Shin Min reported that one video showed the men throwing punches at the debt collector who fell to the floor.

Another video showed a staff member from the vegetable and fruit stall using a fire extinguisher to hit one of the debt collectors, breaking his glasses.

Mr Poh said that he will be meeting his lawyer on Monday.

He told The Straits Times: "Aggressive debtors we have met before, but never have we met people who owe money and still beat up those who are collecting the money from them."

The Straits Times understands that one of the men arrested was a 29-year-old debt collector, who was taken to the National University Hospital with minor injuries. The other three arrested were the owner and his workers from the vegetable and fruit stall.

The owner was released on bail on Saturday morning, an employee of the stall told Shin Min.