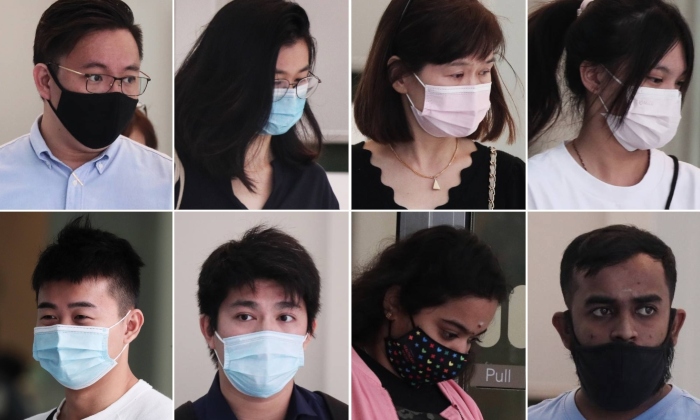 Feeding wild boars came at a high price for 19 people who faced penalties under stricter laws.

Eight of these individuals, aged between 20 and 51, were charged in court on Wednesday (Jan 13) with feeding the native mammals in Lorong Halus.

Four of them pleaded guilty and were each fined $2,500. Two cases were adjourned to Feb 3 and the remaining two intend to plead guilty on Feb 24.

First-time offenders can be fined up to $5,000 and repeat offenders face fines of not more than $10,000 under the Wildlife Act.

The other 11 people will be charged over the next two weeks, said the National Parks Board (NParks).

This is the first time it has taken so many people to court, after stiffer regulations to deter the public from feeding wildlife came into force on June 1 last year.

The 19 people were caught giving bread or dog food to the wild boars by NParks staff during inspection rounds between Nov 26 and Dec 7.

This occurred a few kilometres from Sungei Api Api Park where a woman was injured by a wild boar while walking home on Nov 17. The incident left her with lacerations on her left leg and face.

Feeding and irresponsible discarding of food likely habituated the wild boars, which can weigh up to 100kg, to associate humans with food, said NParks.

This increases the likelihood of them seeking humans and may lead them to venture into urban areas such as roads, it added.

When The Straits Times visited the Lorong Halus Park Connector on Tuesday, around 10 wild boars were seen approaching passing motorists.

While NParks has managed wild boar populations through means such as removing oil palms, which boars have a preference for, the animals may still pose a safety hazard to the public.

If wild animals turn aggressive because of constant feeding, they may have to be culled for public safety, said NParks.

Since June, it has identified several feeding hot spots and taken action against 62 people for wildlife feeding, with more than 20 being taken to court for feeding wild boars, birds and monkeys.

They include a man who fed wild hornbills at Loyang Way Food Village for around six months. He was issued a notice of composition for $200.

NParks is also investigating a man for feeding more than 10 wild hornbills at a condominium.

Outreach and education efforts to raise awareness about the harm caused by feeding will also be stepped up, added the statutory board.

Among these plans is a partnership with the National Environment Agency and Singapore Food Agency to reduce food sources for wildlife at food establishments such as hawker centres and coffee shops.

Another plan will see three young people, mentored by NParks, studying the public perception of feeding wildlife to develop initiatives that encourage human wildlife coexistence by the third quarter of this year.

NParks reminded members of the public that if they encounter a wild boar, they should remain as calm as possible and move slowly away from the animal. They should keep a safe distance and not corner or provoke the animal.

If they encounter adult wild boars with piglets, they should keep a distance and leave the animals alone, as the adult boars are potentially aggressive and may attempt to defend their young.

Members of the public may call the Animal Response Centre on 1800-476-1600 to report any wild boar encounters.