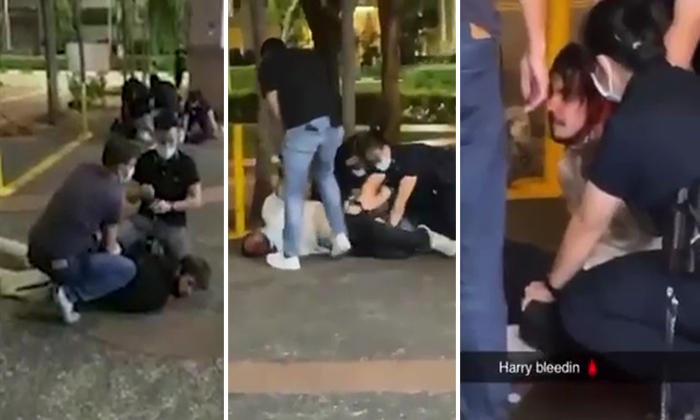 Three men and a teenager were arrested following a fight that broke out at Riverside Point in Clarke Quay on Friday night (Feb 5).

The police said they were alerted to the fight at 30 Merchant Road at around 9.40pm.

Two 18-year-old men and a 22-year-old man were nabbed for affray and being a public nuisance, while a 16-year-old male teenager was also arrested for using abusive language against public servants.

"One of the two 18-year-old men, in a white shirt, had allegedly head-butted the 22-year-old man during the scuffle," the police said in a statement on Saturday.

When police arrived at the scene, officers noted that there were already facial injuries on the 18-year-old man in the white shirt which were purportedly sustained from the fight. He was also bleeding from the forehead.

The 22-year-old man was noted to have suffered a broken tooth.

"Both were rendered medical assistance by the officers and paramedics at scene and the 18-year-old man in the white shirt was subsequently conveyed to the hospital," police added.

"His preliminary medical report confirmed one laceration on the forehead. No other serious injuries were reported."

"The 16-year-old male teenager was arrested when he intervened to try to stop officers from arresting the 18-year-old man in the white shirt, and hurled vulgarities against the officers."

Videos of the arrest have been circulating online, which the police said they are aware of and "that did not present the full account and sequence of events."

The police added: "There are allegations that the officers had used excessive force on the 18-year-old man in the white shirt resulting in him bleeding from the head.

"These allegations are untrue.

"As explained above, the 18-year old man in the white shirt already had facial injuries and was already bleeding by the time the police officers arrived on the scene.

"The officers had assessed the situation and applied necessary force on the man including the use of a baton in the course of arrest as he had put up a violent struggle to resist arrest.

"Contrary to the allegations, the officers did not hit the face of the man with the baton.

"The man was handcuffed after he was subdued."

The police also advised members of the public are advised not to speculate or spread unsubstantiated information.

Anyone with more info regarding the incident can call the police hotline at 1800-255-0000.

If convicted of affray, the three men could each be jailed for up to a year and/or fined $5,000.

For being a public nuisance, offenders can face a jail term of up to three months and/or fined up to $2,000.

Those who use abusive language against a public servant can be jailed for up to 12 months and/or fined $5,000.