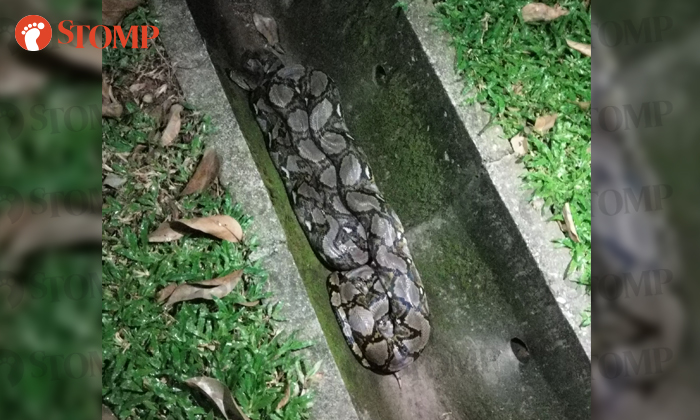 A large python was spotted in a canal along Ulu Pandan Park Connector on Monday night (Nov 5).

Stomper Takasuka said he spotted the reptile, which measured three-metres-long, near Block 32 Ghim Moh Link at around 9pm.

Staff from the Animal Concerns Research and Education Society (ACRES) rescued and contained the reticulated python within 10 minutes of arriving at the scene.

A spokesman for Acres said: "Calls were received from 8.40pm onwards, and the wildlife rescue team arrived at 9.30pm to rescue the python.

"This 3m-long python will be microchipped before being released into a suitable site."

Although the snake was found at a site that is regarded as its natural habitat, Acres rescued the python due to multiple calls and a crowd that had gathered at the location.

There were concerns that the presence of a crowd might result in the animal being handled inappropriately, injured or killed.

"We urge members of public to be aware of our native wildlife, their behaviour, as well as dos and don'ts when encountering wildlife," added the Acres spokesman.

"Reticulated pythons are one of the most commonly found urban wildlife in Singapore. They use our drains to navigate around and mainly feed on rats, playing an important role when it comes to natural rodent control in Singapore.

"They mean no harm to humans, but will give a defensive bite if someone tries to handle them inappropriately.

"Members of the public may call our 24-hour wildlife rescue hotline at 9783 7782 if they are in doubt or need advice. For such cases, it is best to let the pythons be."