37 investigated for various offences after multi-agency raid in Geylang 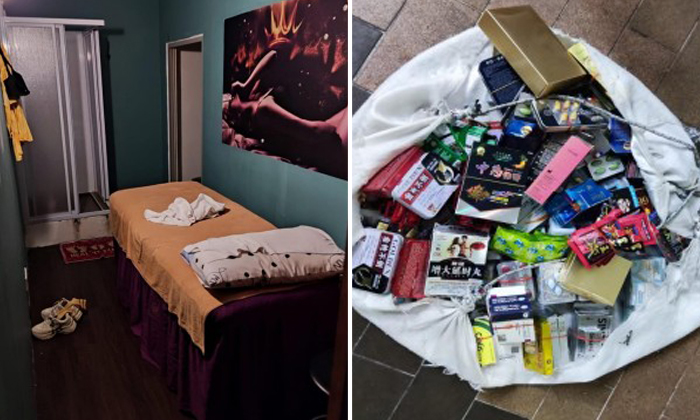 Seven women and 30 men, aged between 21 and 66, are being investigated for various offences following a series of multi-agency enforcement operations conducted between October 15 and October 29.

As part of the enforcement efforts against illegal gambling activities, seven men and one woman, aged between 34 and 66, were arrested for offences under the Remote Gambling Act.

Cash of more than $2,000 and various gambling-related paraphernalia were seized.

During the operation, three men, aged between 32 and 43, were investigated for various offences under the Health Products Act.

Cough syrup, assorted brands of sexual enhancement medicines and other illegal medicines with a street value of about $16,000 were seized.

In an operation against secret society activities and unlicensed massage establishment outlets, four men, aged between 21 and 45, were arrested for being members of unlawful societies.

Five women, aged between 26 and 45, were arrested for offences under the Women’s Charter. Another 39-year-old woman was also arrested for an offence under the Employment of Foreign Manpower Act.

Two men, aged 34 and 40, were arrested for offences under the Customs Act.

Another 12 men, aged between 28 and 59, were issued with composition sums for offences under the Customs Act.

More than four cartons of duty-unpaid cigarettes were seized.

Another two men, aged 52 and 63, were allegedly involved in illegal hawking. They were issued with summons under the Environmental Public Health Act for allegedly hawking secondhand goods (such as clothing and shoes) in a public place, without a valid licence from the SFA.

The goods displayed for sale were seized.

Investigations against all of the individuals are ongoing.

Commanding Officer of Geylang Neighbourhood Police Centre, Deputy Superintendent of Police Lee Ting Wei said: "This operation is part of a multi-agency effort to curb criminal activities in Geylang. It is a continual effort to ensure that Geylang remains safe and secure.

"The Singapore Police Force (SPF) remains dedicated in our efforts to bring offenders to justice and will work with our stakeholders closely to deal with them firmly and swiftly."