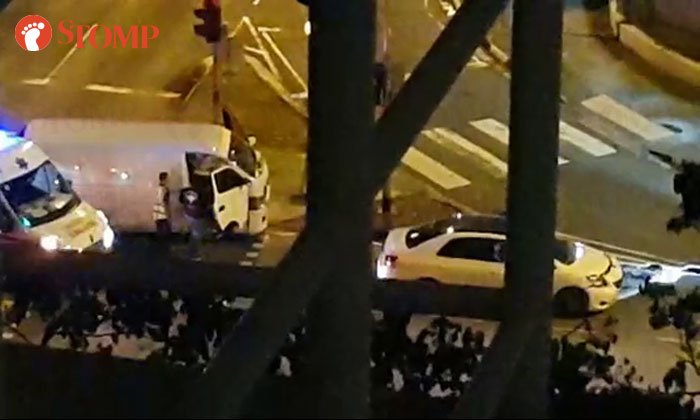 A 34-year-old man was arrested after he was involved in an accident involving a car and a van at the junction of Paya Lebar Road and Ubi Avenue 3 in the early hours of Friday (Oct 12).

Stomp understands that he was the driver of the car.

Stomper Ali alerted Stomp to the incident and shared video footage taken after the collision.

In the video, the van has mounted the pavement and has its doors open. The front of the vehicle appears to be damaged.

A white car is seen parked in front of it.

An ambulance is seen arriving at the scene and a group of people are then seen gathered on the pavement near the vehicles.

In response to a Stomp media query, a police spokesman provided the following statement:

"On Oct 12 at 12.37am, the police were alerted to an accident involving a car and a van at the junction of Paya Lebar Road and Ubi Avenue 3.

"The car driver, a 34-year-old man, was subsequently arrested in relation to the case.

"No one was injured during the accident."

Related Stories
Trailer that overturned at BKE: Video shows how it happened
Car flips over during accident with another vehicle in Woodlands, 2 taken to hospital
Fatal crash at Upper Bukit Timah Road: Passenger who died and driver were cousins
More About:
Accidents
arrested
van
car
collision