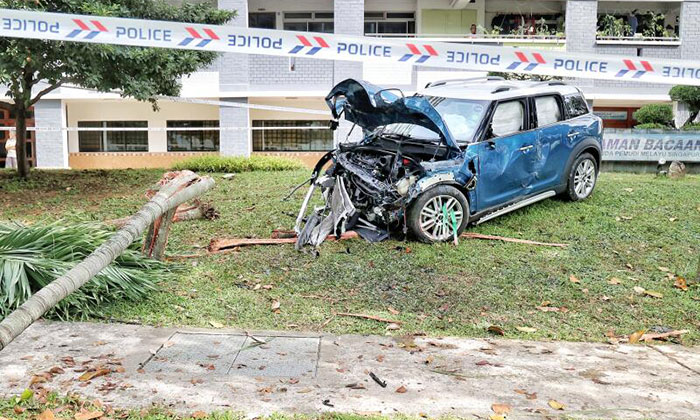 A 34-year-old man died after a traffic accident involving a car in Bedok Reservoir Road towards Kaki Bukit before Jalan Damai on Thursday morning.

Police said they were alerted to the accident at 6.27am.

The man, who was the driver of the car, was found at the foot of a residential block near the accident site and was unconscious when taken to hospital, the police said. He died in the hospital later.

Singapore Civil Defence Force (SCDF) said it was alerted to the accident at about 6.30am.

“Subsequently, a person who was found at the foot of a residential block nearby was conveyed by SCDF to Changi General Hospital,” said SCDF.

A photograph of the accident scene by Chinese-language newspaper Shin Min Daily News and photos posted online show a blue Mini Countryman with a badly damaged bumper beside a felled tree on a grass patch.

Shin Min reported that a 45-year-old resident said that the driver was still inside the car when he went to check it out after a hearing a loud crash.

He said that after the accident, the driver had struggled to open the door and slowly made his way to the back of the car.

The witness added that he did not see any other passengers in the car.

The Chinese newspaper also reported that a 49-year-old resident said his neighbour saw the driver lying on the ground with his head bleeding.