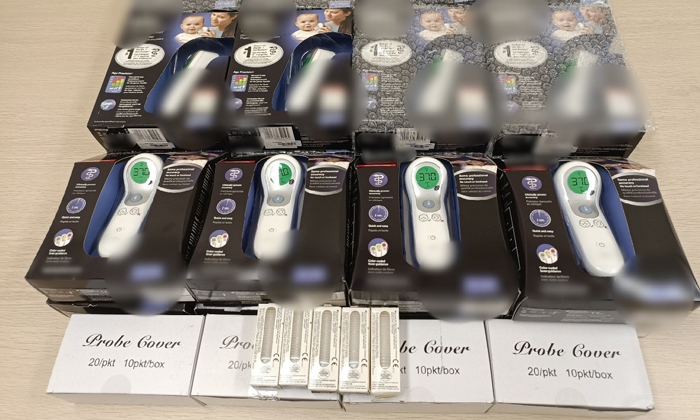 A 33-year-old woman has been arrested for allegedly selling counterfeit thermometers online after procuring them from foreign sources.

The police said that officers from the Criminal Investigation Department conducted raids at Bedok Reservoir View and Potong Pasir Avenue 1 on Friday (Nov 26).

More than 300 pieces of trademark-infringing thermometers and probe covers, with an estimated street value of more than $14,000, were seized.

"Preliminary investigations revealed that the woman had allegedly procured these counterfeit thermometers from foreign sources and offered them for sales online," said the police.

Under the Trade Marks Act, anyone found guilty of selling or distributing goods with falsely applied trademarks may be fined up to a maximum of $100,000 and/or face up to five years in jail.

The police said they take a serious view of intellectual property rights infringements, especially in relation to counterfeit goods that might pose potential health risks.

They added: "Importation and distribution of counterfeit goods are serious offences, and the police will not hesitate to take firm action against perpetrators who profit at the expense of legitimate businesses and consumers."