$32m luxury goods scam: Couple say they were under a lot of pressure, had death threats 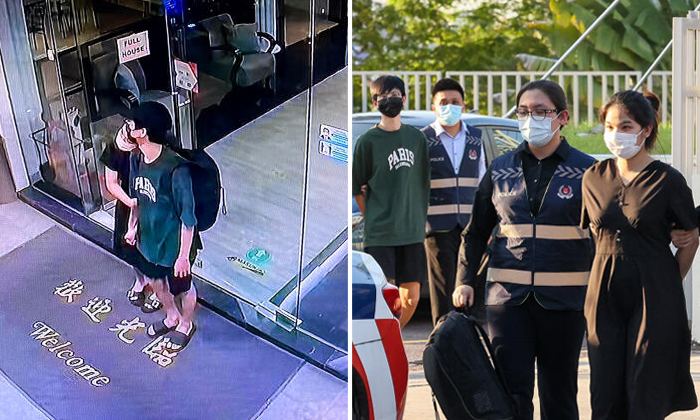 The couple allegedly involved in a luxury goods scam, related to undelivered items worth $32 million, were in court on Friday afternoon (Aug 12).

Pi Jiapeng, 26, and his 27-year-old Thai wife Pansuk Siriwipa were each handed three charges – two for cheating and one charge of leaving Singapore illegally.

The duo are accused of being involved in a conspiracy to cheat customers of Tradenation and Trade Luxury between January and June this year.

The pair had allegedly duped victims into believing they would be sold watches and luxury handbags, but without any intention to deliver the items, the court heard.

The couple appeared together in court via video link and had their charges read to them.

Pi, who spoke in English, wore a dark green T-shirt, while Pansuk, who wore a black top, spoke through a Thai interpreter.

District Judge Brenda Tan remanded the pair for a week, agreeing with the prosecution that Pi and Pansuk were proven flight risks.

The pair, who were unrepresented, will return to court on Aug 19. Deputy Public Prosecutor David Koh said victims had filed more than 180 police reports against the two companies.

Pi and his wife purportedly traded luxury bags and watches through the two business entities.

The DPP said victims paid more than $20 million but did not receive their goods. The specific sum involved was not mentioned in court documents.

He added that Pi was arrested by the Singapore Police Force (SPF) on June 27 and released on $15,000 bail. The authorities also impounded the couple’s passports.

But they became uncontactable and allegedly fled Singapore illegally via the land border on July 4, said DPP Koh.

He added that Malaysians Mohamed Alias, 40, and Mohamad Fazli Abdul Rahman, 38, were earlier charged in relation to this matter.

Alias and Fazli purportedly helped the couple flee the country by letting them hide in the container compartment of a Malaysia-registered lorry, which then passed through Tuas Checkpoint.

Following their escape, warrants of arrest were issued against the couple, with Interpol issuing a red notice against them, said the DPP.

“It was only after significant effort on the part of SPF, working in tandem with their international counterparts, that the accused were located,” he added.

They were arrested at a budget hotel in Skudai, a 20-minute drive from the Causeway, by Malaysian police on Thursday and handed over to SPF the same evening, said DPP Koh.

In calling for the pair to be held in remand for investigation, he said the couple should not be granted bail as they are likely to abscond.

“Investigations are still at an early stage. Due to the scale of the case, with more than 180 police reports made, time is needed to investigate and take statements from the accused persons,” said the DPP.

In reply, Pi told the court they were wrong to have left Singapore illegally. He claimed they were under a lot of pressure and had death threats directed at them.

“We are really very sorry for the trouble brought to the ICA (Immigration and Checkpoints Authority).

“We will do our best with the SPF and investigations from now on,” said Pi.

Speaking through an interpreter, Pansuk said that she would cooperate with the police.

Pi and Pansuk each face up to 10 years’ jail and fine for each count of cheating.

For fleeing the country without presenting a passport, they can be jailed for up to six months and fined.