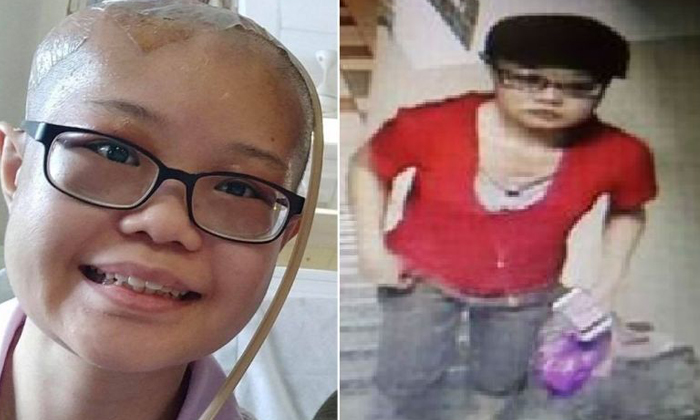 The woman has been found by an eagle-eyed man on Nov 29, according to The Straits Times. She was spotted at loitering at Khoo Teck Puat Hospital on by Mr Yoon Wai Lam, a speech therapist who works at the hospital.

In a Facebook post on Nov 22, she said that her friend Charmaine had been staying in her house at Woodlands Circle for nearly 12 years after becoming estranged from her family.

Ms Law, 35, told The Straits Times on Monday (Nov 27) that she discovered Teo was not at home when she tried calling her last Tuesday night and realised her phone was not switched on.

She added that she left everything behind in the house and did not bring her identification card, passport, bank card, EZ-link card, phone and keys.

She described Ms Teo as 1.5m tall and is appealing for netizens to help contact the police if they see her.

Ms Law is also concerned about the wound on her head and said in the same Facebook post:

"She will be due to change her dressing on 23 Nov if not her wound might get infected and worsen her condition."

Her wound was the result of her hitting herself with a brush repeatedly at night, and then applied ice to it, causing a cold burn.

She was hospitalized for 33 days at Khoo Teck Puat Hospital for the self-inflicted wound.

Although she had been spotted by several netizens at Ang Mo Kio and Yishun, she still has not been found.

She also mentioned in her Facebook post that she believed her friend was upset due to stress from work and her family problems.

Prior to this incident, Ms Teo had went missing for six days before police found her in July of this year.

The police sent out a missing person notice on Friday (Nov 24).

She was wearing a red shirt, black pants and a black cap.