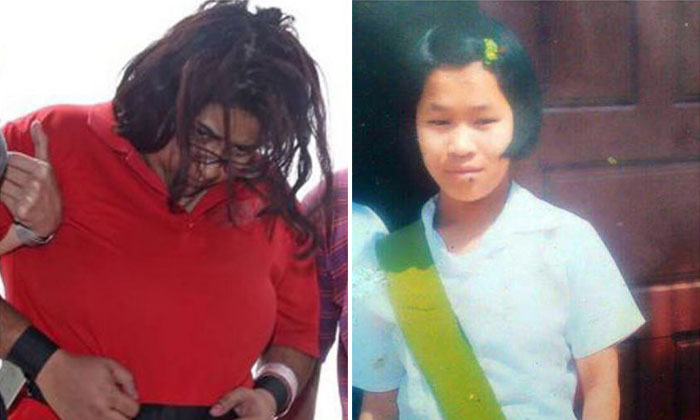 A 41-year-old housewife who starved, tortured and ultimately killed her domestic worker from Myanmar stared blankly into space as she was sentenced on Tuesday (June 22) to 30 years in prison – the longest jail term meted out here in a maid abuse case.

He described the case as "among the worst cases of culpable homicide", noting that the victim was made to endure agonising physical and psychological harm for a long time before she died.

However, Justice See was not persuaded by prosecutors’ arguments that the court’s “righteous anger” should be invoked to hand down a life term.

“The sentence of the court is not and indeed should not be based on an overriding visceral sense of indignation,” he said.

The judge said that while the sentence must “signal societal outrage and abhorrence”, the fact that Gaiyathiri was suffering from a psychiatric condition that affected her judgment cannot be ignored.

Gaiyathiri was assessed by several psychiatrists to have suffered from post-partum depression and obsessive compulsive personality disorder. These conditions had significantly contributed to her offences.

He noted that Gaiyathiri had four previous domestic helpers who did not lodge any reports against her and did not appear to be a pathologically violent person.

Gaiyathiri had pleaded guilty in February to 28 charges, the most serious being one for culpable homicide, for which she was handed 20 years’ jail.

The other charges were mostly hurt-related offences involving varying degrees of physical abuse she inflicted on Ms Piang.

Another 87 charges were taken into consideration.

In 2002, freelance tour guide Ng Hua Chye, 47, was sentenced to 181/2 years’ jail and 12 strokes of the cane for starving and beating his maid for nine months till she died.

Ng had pleaded guilty to a charge of culpable homicide for killing 19-year-old Muawanatul Chasanah, for which he was handed 10 years’ jail and six strokes of the cane.

He also pleaded guilty to four hurt-related charges, with another three taken into consideration.

In sentencing arguments on Tuesday, defence counsel Joseph Chen, who took over the case from Gaiyathiri's previous lawyers in March, sought a jail term of eight to nine years.

Mr Chen described his client as suffering from a mental disorder. She had just given birth and was struggling to cope with her children's illnesses, which she believed were caused by the maid's poor hygiene.

Gaiyathiri, whose two children are now aged nine and six, developed major depressive disorder while she was pregnant with her second child.

"It was a combination of stressors that led to her evolving from a non-maid abuser to a maid abuser," Mr Chen said.

"She has gone back to her previous self as a non-maid abuser," he added.

He asked the court to place more weight on rehabilitation so that there would be a "healing effect" for her and other mothers suffering from postpartum depression.

Mr Chen said his client was remorseful for what she had done and that she regretted that Ms Piang had been unable to reach out for help.

He also sought a gag order on the publication of her name to protect her children from stigmatisation.

However, Deputy Public Prosecutor Mohamed Faizal Mohamed Abdul Kadir countered: "A mental disorder per se is not a free pass."

He noted that Gaiyathiri's condition was the reason the charge for killing Ms Piang was reduced from murder.

"This is a shocking case without parallel," said the DPP, who described Gaiyathiri's conduct as "cruel and heinous".

He took issue with Gaiyathiri trying to blame Ms Piang's hygiene, when many of her offences had nothing to do with cleanliness.

"The violence is a function of the accused viewing the victim as a lesser human being," said the prosecutor. He added that Gaiyathiri was remorseful only about being caught and punished.

He sought at least 27 years' jail, if a life term was not imposed.

Mr Chen said Gaiyathiri's family member has asked him to file an appeal against the sentence.

The incidents in the last month of her life were captured on surveillance cameras that Gaiyathiri and her then husband, Kevin Chelvam, a policeman, had installed in their Bishan flat.

The couple finalised their divorce on Jan 13 last year. 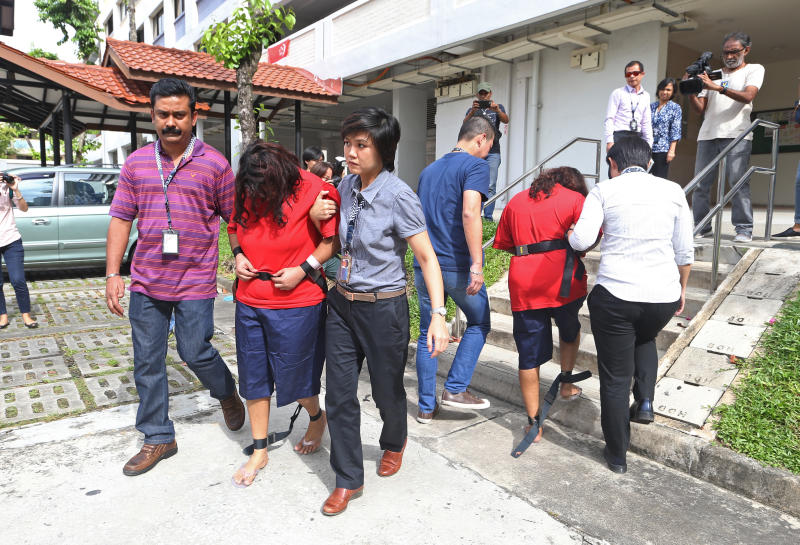 Police officers escorting Gaiyathiri Murugayan (left, in red) and her mother Prema Naraynasamy (right, in red) to their home at Block 145 Bishan Street 11 for investigations into the case on Aug 3, 2016. PHOTO: ST FILE

She was also seen hitting the maid with objects, pulling her by the hair and shaking her violently, burning her with a heated iron and choking her.

The maid's meals often comprised sliced bread soaked in water, cold food straight from the refrigerator or some rice at night.

She was also made to shower with the toilet door open.

In the last 12 days of her life, she was tied to the window grille at night while she slept on the floor.

Chelvam, 42, who was suspended from service on Aug 8, 2016, faces multiple charges in connection with the abuse of Ms Piang. Gaiyathiri's mother, Prema S. Naraynasamy, 62, who often stayed with the couple in the flat, was also charged in 2016.

Their cases are pending in court.

On the night of July 25, 2016, the maid was assaulted by Gaiyathiri and Prema for being too slow in doing laundry.

Gaiyathiri continued assaulting the maid the next morning and choked her. A few hours later, a doctor pronounced her dead in the flat.

In the wake of the case, the Government reviewed three key areas to ensure better protection for domestic workers.