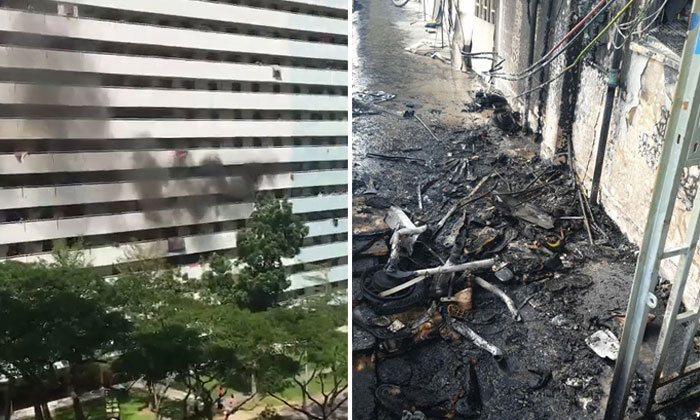 About 30 residents were evacuated from a block in Eunos after a fire broke out on Sunday (June 14) afternoon.

The fire is believed to have been caused by a personal mobility device (PMD) that was charging shortly before the fire broke out, the Singapore Civil Defence Force (SCDF) said in a Facebook update on Sunday.

The SCDF were alerted to the fire at Block 1 Eunos Crescent at about 3.05pm and no injuries were reported.

When SCDF personnel arrived, part of a corridor on the seventh floor of the block was engulfed in flames, the force said. The team put out the fire using a fire extinguisher and a water jet.

The SCDF has tips to prevent PMD-related fires on its website.

The Land Transport Authority (LTA) encourages all PMD owners to use UL2272-certified devices and look out for the UL2272 certification marks when buying a PMD.

More information on UL2272 certification and a list of certified devices in Singapore are available on LTA's website.

All owners of non-UL2272-certified PMDs are also strongly encouraged to dispose of their devices at designated points as soon as possible. More information on PMD disposal is available on the website.