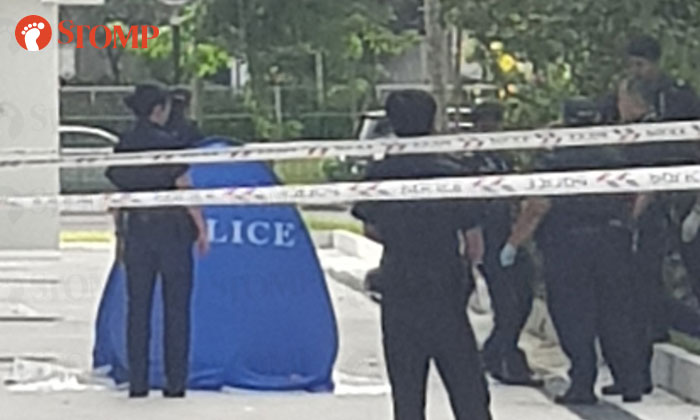 A three-year-old boy was found motionless at the foot of Block 332 Ang Mo Kio Avenue 1 on Tuesday morning (Feb 18).

He was subsequently pronounced dead by a paramedic.

Stomper Shirlene alerted Stomp to the incident and shared a photo of a blue death tent at the foot of the block.

The area had been cordoned off by police.

Stomper Jocelyn, another resident in the vicinity, told Stomp that she called the police after her mother saw the boy lying on the ground.

"At around 6.30am, we heard a loud sound, like something heavy hitting the ground, from the kitchen," she said.

"My mum was was curious so she went to look out the window and saw a little boy lying on the ground.

"This was when she notified me to call the police which I did at 6.37am.

"The call lasted for about a minute.

"The police arrived at the scene 10 minutes later and interviewed my mum as she was the first-hand witness to the incident.

"The ambulance arrived around 6.50am when the boy was pronounced dead.

"When I saw the boy at 6.40am, he was already motionless with his head in a pool of blood."

In response to a Stomp query, the police said they were alerted to a case of unnatural death at the said location at 6.38am.

"A three-year-old boy was found lying motionless at the foot of the said block," a police spokesman said.

"He was pronounced dead at the scene by a paramedic."

Related Stories
Driver dies in taxi at Kelantan Road
Man found dead at Punggol carpark after allegedly stabbing himself due to money problems
Half-naked man found dead at foot of Punggol block after being confined in room by another man
More About:
death
death tent
toddler
child
fall