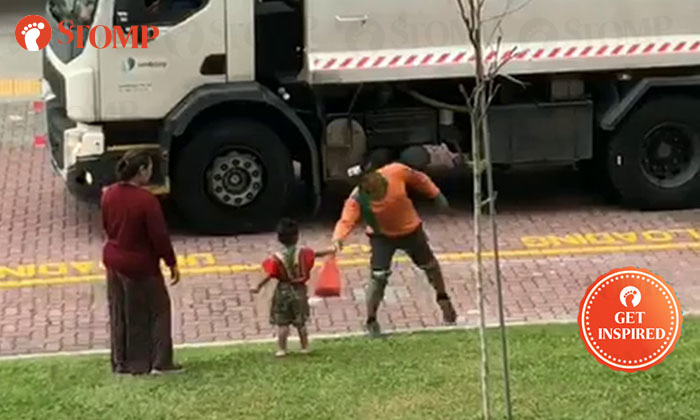 A Choa Chu Kang resident was touched when she saw her 3-year-old neighbour offering a bag of goodies to SembCorp workers at about 11am on Friday (Jan 10).

Stomper Suri contributed a video of what she saw and said: "Every day without fail, I would see the boy go downstairs with his aunty to say 'hi' to these SembCorp workers.

"We've been neighbours here at Block 758 Choa Chu Kang North 5 for about eight years and I noticed them doing this about six months ago."

Suri told Stomp: "On this particular day, before they went downstairs, I heard the boy crying.

"I went to ask his aunty what happened and found out that he was actually sick for the past one week, so he wasn't able to go say 'hi' to the SembCorp workers.

"The boy also wanted to give some bread to the men.

"I feel so proud of this boy because not every kid would do this.

"He said that he sees the SembCorp men as heroes who drive around in their trucks and clean rubbish for people.

"Most kids might find the garbage men smelly but this boy is special because he's so appreciative."