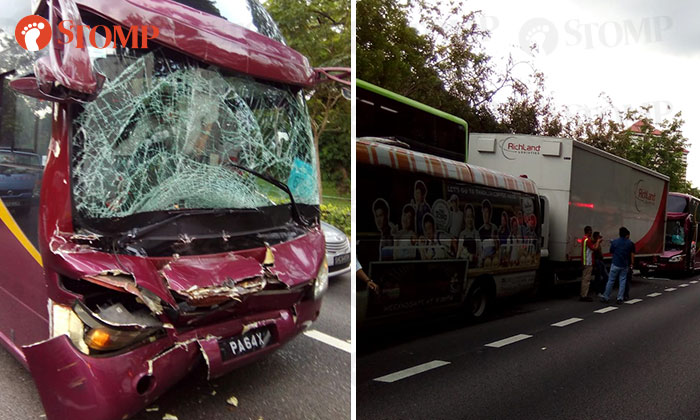 Three teenagers all aged 13 were conveyed to the National University Hospital (NUH) after a chain collision involving three buses and two lorries along the Ayer Rajah Expressway (AYE), before the Alexandra exit at about 3.37pm on Thursday (May 17).

Stomper Huat and his colleague were driving by the vicinity at the time, and he told Stomp that his colleague was in shock after witnessing the accident.

Huat alighted his vehicle and went to the bus at the end, which seemed to be the most seriously damaged among the vehicles involved.

Photos taken by him show the front of the bus smashed in, with its windshield cracked.

Other photos show officers from the police and Singapore Civil Defence Force (SCDF) at the scene.

A group of students is seen gathering at the side of the expressway.

Huat said that the coach driver, a man in a green shirt, was trapped under the steering wheel and could not pull his leg out.

He then called the police and the SCDF for help upon realising that the driver’s hand was bleeding.

According to Huat, most of the passengers, which comprised of students and a teacher, did not appear to be injured.

"It was quite sad that the drivers involved were preoccupied taking photos of the damage on their vehicles first instead of checking on the injured."

He also observed three ambulances, a fire engine, and police patrol vehicles at the scene.

"On May 17, 2018, at 3.37pm, the police were alerted to an accident involving three buses and two lorries along the AYE, before the Alexandra exit.

"One male and two females, all aged 13, were conveyed to NUH.

The SCDF told Stomp that they were alerted to the accident at 3.40pm, and three teenagers were conveyed to NUH for treatment.

Related Stories
Lorry driver arrested for drink-driving after crashing into bus in Tuas
2 women taken to hospital after accident involving 2 cars at Sengkang junction
Watch bizarre video of driver colliding into Audi as he tries to park and fails miserably
More About:
accident
injuries
AYE
expressway