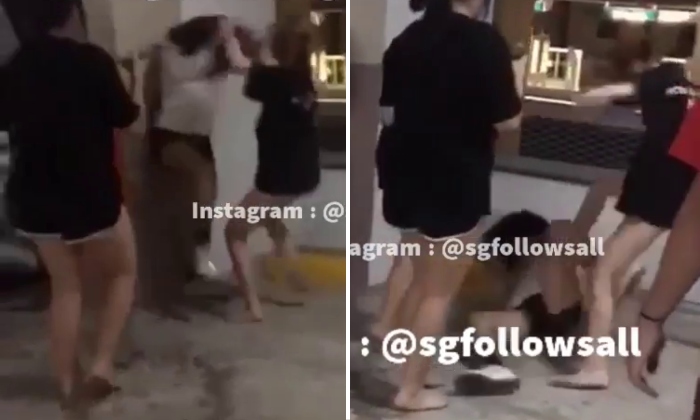 Three teen girls were caught on camera brutally assaulting another girl on deck 6A of a Sengkang multi-storey carpark on Tuesday night (Aug 16).

Videos show that two teen boys and a woman bystander were also at the scene. The two boys were wearing what appeared to be Jurong Secondary School T-shirts.

The three girls dressed in black were seen ganging up on the girl in a white top. They threw a drink at her, kicked her, slapped her, pulled her hair and threw a slipper at her as they taunted her and laughed.

One of the assailants accused the girl in white of "bad-mouthing" someone.

In one video, the girl in white ran to one of the boys who stood between her and the other girls. In another video, the boy tried to stop the assault but did not try very hard.

In response to a Stomp query, the police said they were alerted to an alleged assault by a group of three females against a female teenager at the multi-storey carpark of Block 269 Compassvale Link at 9.26pm.

"The female teenager sustained injuries but did not require immediate conveyance to hospital. She subsequently sought medical attention.

"The persons involved are believed to be known to one another," said police.

Related Stories
'Royal rumble' outside Orchard Towers: 3 men arrested for rioting
Man staggers and falls after being kicked in crotch, punched in head at Hougang void deck
Woman throws chair at another over getai seat, gets punched 3 times until her face is bloody
More About:
Teens
girls
carpark
assault