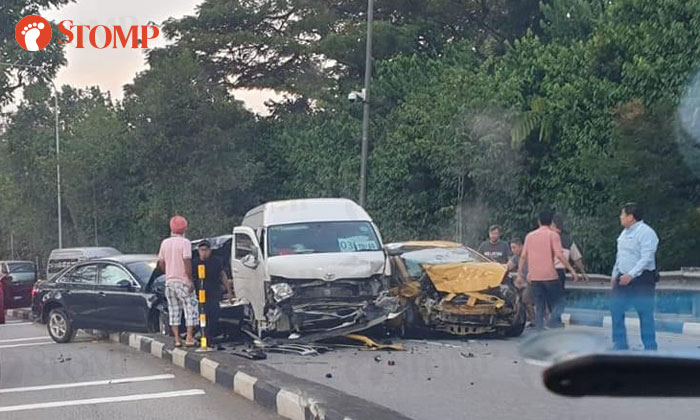 Two car drivers, aged 52 and 45, and a 14-year-old male passenger were taken to hospital after an accident involving two cars and a van occurred at Eng Neo Avenue on Thursday morning (Apr 2).

Stomper Aish and Watson alerted Stomp to the incident and shared a photo and footage of the scene.

In a video, the fronts of all three vehicles appear to be badly damaged.

One of the cars involved appears to have mounted the central road divider.

At 7.17am, the Land Transport Authority (LTA) tweeted that the road was closed due to the accident.

In response to a Stomp query, the police said they were alerted to the accident along Eng Neo Avenue towards the Pan Island Expressway (PIE) at 7.04am

"One of the car drivers, a 52-year-old woman, and her 14-year-old male passenger were conscious when conveyed to National University Hospital," a police spokesman said.

"Another car driver, a 45-year-old man, was conscious when conveyed to Ng Teng Fong General Hospital."

Related Stories
Lorry overturns in accident with taxi along Buyong Road
Car ends up on pavement in accident at Woodlands Crescent
Woman taken to hospital after car overturns along Jalan Teck Whye
More About:
accident
van