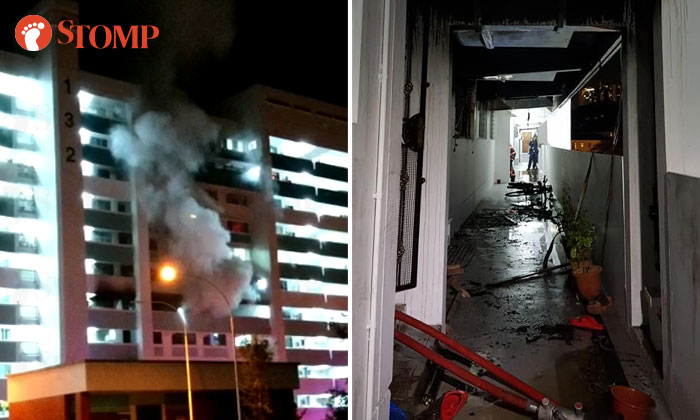 Three people were taken to hospital with burn injuries after a fire broke out at a sixth-storey unit at Block 132 Cashew Road on Monday night (Feb 4).

Stompers Nicholas and Mickson alerted Stomp to the fire and shared videos of it.

Nicholas told Stomp that he believes an e-scooter had caused the fire.

The Singapore Civil Defence Force (SCDF) posted a statement about the fire on their Facebook page at about 10.34pm on Monday.

It said that it was alerted to the fire at about 8.45pm.

"The fire involved the contents of a bedroom and was extinguished with one water jet and three Compressed Air Foam Backpacks.

"The fire was extinguished in about 15 minutes.

"Nine persons evacuated from the affected unit prior to the arrival of SCDF.

"Three of the occupants suffered burn injuries and were conveyed to Singapore General Hospital.

It added that approximately 100 residents staying from the fifth to eighth storeys were evacuated earlier by the police.

The residents were subsequently allowed to return to their homes.

Related Stories
Another Jaguar catches fire, this time along TPE
Fire at The Arcade extinguished by sprinklers and member of public
Jaguar engulfed in flames at Pending Road carpark causes nearby Suzuki to catch fire as well
More About:
fire
scdf
burn
injured