3 people, including 80-year-old woman, taken to hospital after 4-vehicle collision at Geylang junction 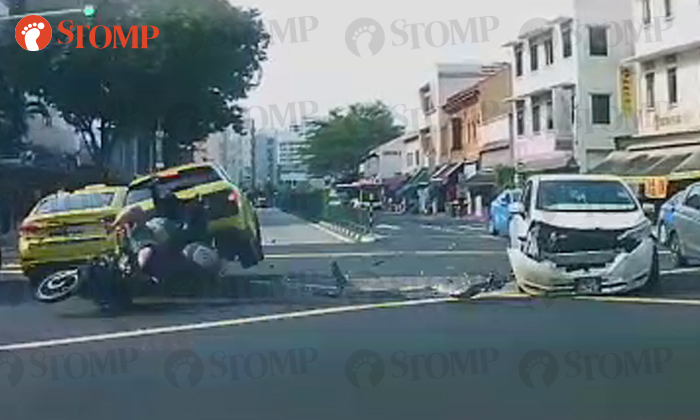 A 69-year-old man and two women, aged 49 and 80, were taken to hospital after a four-vehicle collision at the junction of Sims Avenue and Aljunied Road on Sunday morning (March 24).

In response to queries by Stomp, the police said they were alerted to the accident involving two cars, a taxi and a motorcycle at 9.59am.

The motorcyclist, along with two female passengers from one of the cars, were taken to Tan Tock Seng Hospital in a conscious state.

Stomp understands that the motorcyclist sustained facial injuries in addition to abrasions on both hands and elbows.

The two women suffered giddiness as well as pains to their backs and shoulders.

Several Stompers shared a circulated video of the crash, showing how a yellow car had hit the other three vehicles.

The motorcyclist, who can be seen trying to brake, was flung off his bike.

A white car that was the first to be hit is also seen with a mangled front bumper after the collision.

Related Stories
Cabby opens taxi door to check on accident with car, causing 2 motorcycles to crash
Ouch! Motorcyclist crashes into car and hits taxi at Simei Avenue
Female motorcyclist hit by car -- then gets run over by van on AYE
More About:
accident
taxi
biker
motorcyclist