3 men surrounded by 20 cops for possession of knife, violence and resisting arrest at Outram Park 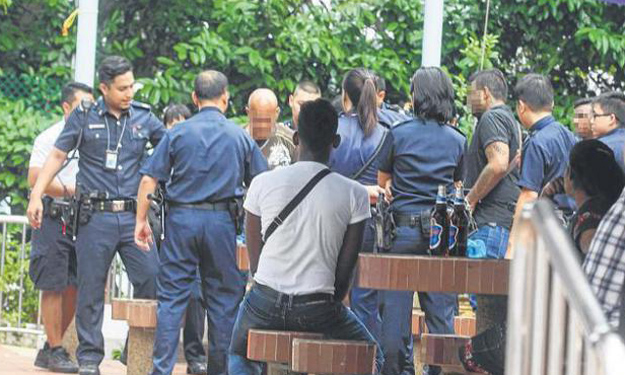 About 10 tattooed men were interrogated by policemen in the Outram Park area.

According to Shin Min Daily News, knives were found when the police searched them and the men turned violent. Nine police cars arrived at the scene and three men were arrested.

This happened on Sep 26, 8am, just outside Block 5 Jalan Minyak's coffeeshop.

Mr Tan, a 61-year-old resident of the area, recalled the 10 men sitting at a round table while being completely surrounded by cops.

Eyewitnesses told the Shin Min news reporters that one muscled bald man was pinned onto the table by cops when he resisted arrest.

Four to five policemen then cuffed his hands behind his back and pressed his chest to the round table. They then searched him and brought him away.

According to the Chinese newspaper, about 10 men and 1 woman from the age of 20 to 40 were questioned by the police. Most of them were tattooed, and one of them had tattoos all over his face.

A resident, 57-year-old housewife Madam Zhen, recognised some of them to be her neighbours.

The police confirmed that they received a tip-off at 8.21am that morning, and after conducting a search on a group of men, three of them possessed dangerous weapons like knives.

The men also provided fake documents and turned violent on the cops.