3 men send lewd flyers of Kurt Tay to his Yishun neighbours 'for fun', paste them at Northpoint 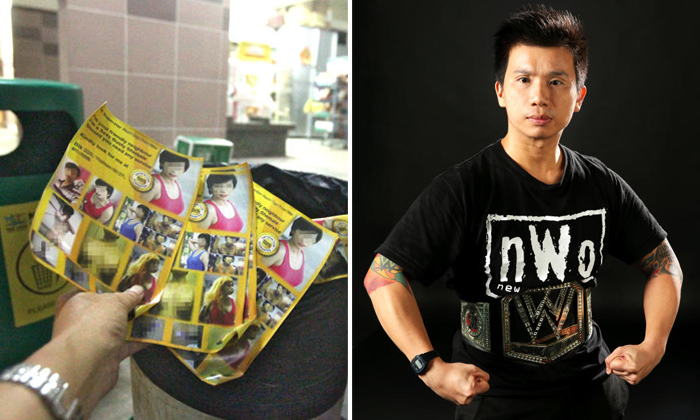 Three men created lewd flyers of online personality Kurt Tay, which they then pasted at the victim's block and workplace, even stuffing them into his neighbours' letterboxes.

According to Lianhe Wanbao, two of the men were arrested and charged in court for unlawfully stalking Kurt Tay from December 22, 2015 to February 11, 2016.

Ang, an IT consultant, was sentenced to six months in jail while Chua, a master sergeant with the military police, was given five months in jail on Tuesday afternoon (Oct 2).

A third man, a Malaysian surnamed Chong, remains at large.

According to court documents, Kurt Tay had started posting controversial videos on YouTube and Facebook after undergoing breast augmentation in 2014, which the three men watched.

Although the trio had never met, they often left comments on Kurt Tay's Facebook posts and got to know each other.

Wanting to "make fun" of Kurt Tay "for sport", they decided to use his photos to make posters and flyers that claimed he was offering sexual services.

Besides using humiliating photos of Kurt Tay, the men also included his address and nude pictures of him in the flyers.

Describing Kurt Tay as a "friendly neighbour" and a "sexy bisexual", they implied that he provided "special services".

Kurt Tay's parents tore down the posters after discovering them and told him to report the incident to the police.

On Feb 9, 2016, the trio arranged to have dinner together to celebrate Chinese New Year. However, Chong was late and the dinner got cancelled.

They decided to paste the flyers at Kurt Tay's block "for fun" instead, even wearing masks to hide their identities from CCTV cameras.

The following day, they learnt that Kurt Tay was working at Northpoint City, leading them to paste more flyers around the shopping centre's lifts and escalators.

After leaving the mall, they returned to Kurt Tay's block and pasted the flyers at the lift landing of every floor.

Kurt Tay's parents saw the flyers and removed them together with Kurt.

On Feb 11, Ang and Chong returned to Kurt Tay's block once again and stuffed the flyers into every letterbox there, prompting the victim to call the police.