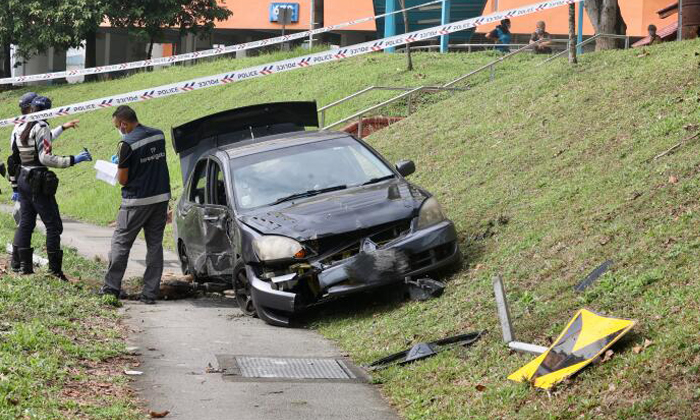 Three men were spotted leaving the scene of a crash site hurriedly after a black car slammed into a lamp post in Hougang on Wednesday morning (March 16).

The car mounted a kerb, crashed into the lamp post and then slid across the grass verge before finally stopping on a sidewalk in front of Block 670.

Police said the car is believed to have skidded.

Chinese evening daily Shin Min Daily News reported that residents in the area saw three men climbing out of the damaged car shortly after the crash.

The men then ran up the grass slope towards some housing blocks.

A 20-second video of the aftermath of the accident shows a man in a white top leaving the front passenger seat.

The car appears to be damaged, with its boot compartment left wide open.

Police arrived shortly after and cordoned off the area. The car was towed away about four hours after the incident.

No injuries were reported and investigations are ongoing, said police.

A resident of the area who wanted to be known only as Madam Zhu told Shin Min that the path is used by many elderly residents.

The 67-year-old said it was fortunate nobody was walking there when the accident happened.

Another resident, who wanted to be known only as Mr Lu, told Shin Min that an accident happens in the area every few months because motorists speed around the bend.

Related Stories
Car sent flying onto grass patch in 3-vehicle accident at Bedok Road junction
Driver taken to hospital after crashing van into tree at Sumang Lane
Lorry flips onto its side after accident with car along SLE, passenger taken to hospital
More About:
accident
trapped in odd spot