3 men fined over 'meaningless' fight outside MBS casino: Dispute was over taxi, not woman 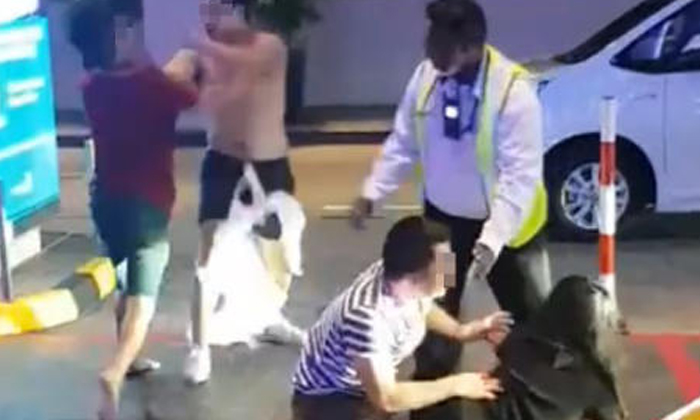 Three men have been fined for their involvement in a fight that broke out at a taxi stand outside the Marina Bay Sands Casino earlier this year.

A witness, who posted a video of the violent altercation online, previously told Stomp that the incident occurred on February 22, at around 2am.

According to Lianhe Wanbao, netizens initially speculated that the three men involved in the dispute were brawling over a woman. However, they were actually fighting over queue-cutting at the taxi stand.

The court heard that Liu Minglong, 27, and his girlfriend had been waiting for a cab at the taxi stand after finishing their date at a food court.

Yan Yingguan, 50, and Xiao Zhongyao, 35, had just left the casino and were queuing behind the couple.

A cab then approached the taxi stand, but did not stop. Liu and his girlfriend chased after the taxi for some distance but eventually returned to the queue.

At this time, the couple saw Yan and Xiao preparing to board another taxi and rushed towards it, wanting to get on too.

The four got into an argument, during which the three men were hurling vulgarities.

Yan raised his foot with the intent to kick Liu, but the latter punched him first.

The three men came to blows.

Seeing two men against her boyfriend, Liu's girlfriend grabbed onto Yan to stop him while Yan and Xiao continued fighting.

During the tussle, Xiao threw Liu onto the ground. When Liu got up, he turned to Yan and kicked him to the ground.

A security guard pulled the men apart and both pairs left the scene via taxi.

During the court hearing, the prosecutor said that both parties should not have gotten into a dispute over meaningless things. He also asked for Liu to be given a heavier fine as he had started the fight.

Liu's defence lawyer disagreed that it was a meaningless matter and said Liu had the right to defend his own rights, reported Wanbao.

Yan and Xiao, both Malaysians, were unrepresented in court. They pleaded for leniency, citing that they were fruit stall assistants and did not have a high income.

Related Stories
Backflip, torn shirt and vulgarities during fight involving 1 woman, 3 men outside MBS casino
Chairs, glass and punches thrown during fight at Hougang coffee shop: 5 arrested
Man allegedly threw plate of rice at cleaner and pushed her after she cleared his coffee away
More About:
fight
dispute
argument
court