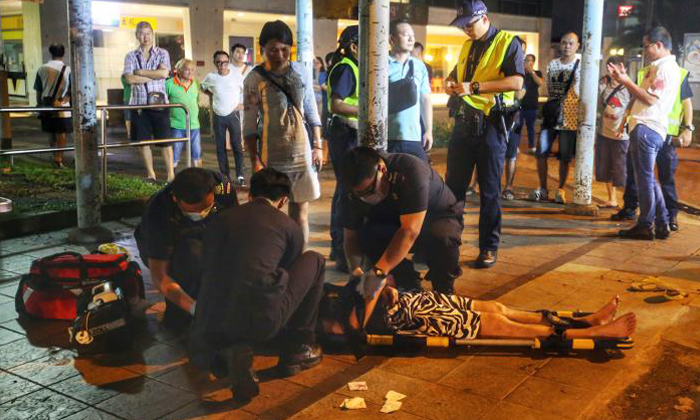 Three men were arrested after a fight broke out among them at a coffee shop at Block 711 Ang Mo Kio Avenue 8 on Sunday (June 3), just after midnight.

According to The Straits Times, a group of six friends -- four Chinese nationals and two Malaysians -- had gathered at the coffee shop to celebrate the fact that two of them would be returning to their home country soon.

What was supposed to be a joyous occasion turned tense when some people in the group suggested moving to another location for more drinks, but the rest refused.

The trio then got into a fight.

In response to a Stomp query, the police said they received a call for assistance at 12.16am.

Three men aged between 35 and 39 were arrested for affray.

One of them was unconscious when taken to Tan Tock Seng Hospital.

A photo published by Lianhe Zaobao shows a man lying on a stretcher while paramedics attended to him.

According to the Chinese newspaper, a woman, who had spots of blood on her hands and clothes, was seen crying next to him.