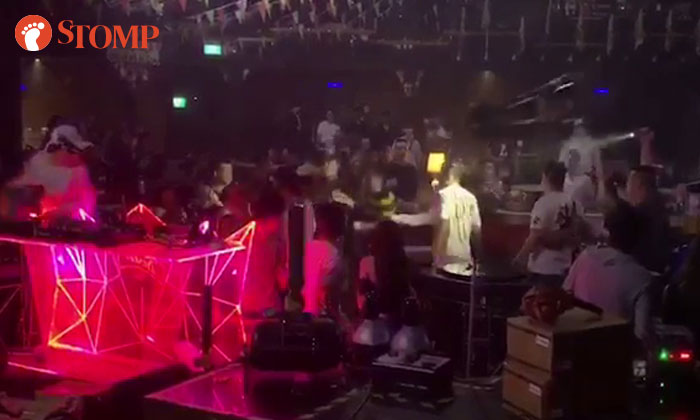 Three men were arrested for public nuisance and causing annoyance when drunk after a brawl broke out at Republic Club at Orchard Plaza in the early hours of Feb 9.

A Stomper who was at the club at the time of the incident alerted Stomp to the fight and shared videos he had received from friends.

In the videos, men can be seen shouting and shoving at each other on the club's dance floor.

Soon, drink glasses and ice buckets and even chairs are seen being thrown across the room.

Women can be heard screaming as the club's security personnel holding torch lights try to break up the fight.

According to the Stomper, more items were thrown during the brawl: "Guys were throwing punches and glasses, tables, chairs, beer towers and bottles were all sent flying."

"The club's security was unable to stop the fight so police were called in."

In response to a Stomp media query, the police said they received a call for assistance at 150 Orchard Road at about 5.20am.

"Two men, aged 24 and 28, were arrested for public nuisance, while another 24-year-old man was arrested for causing annoyance when drunk," a spokesman said.

Related Stories
Men fling beer bottles at each other during brawl in Geylang restaurant
St James brawl allegedly started after men bumped into each other, patrons banned from club
Viral videos of men tussling, arguing with police are from 2017 case where 4 men were arrested
More About:
fight
dispute
brawl
club
Orchard Road
arrested