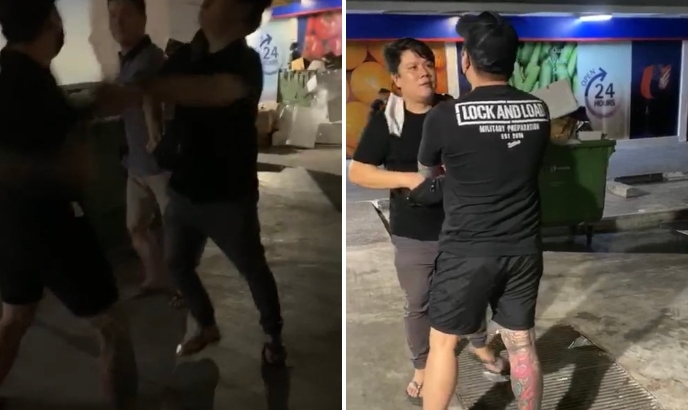 Three men have been arrested after getting into a scuffle at Block 85 Bedok North Street 4, outside Bedok 85 hawker centre, on Friday (Aug 28).

Stomper David and three anonymous Stompers alerted Stomp to what happened and shared the videos of the fight.

This video has been making its rounds on social media over the weekend.

In the video, the men are speaking in dialect and can be heard threatening each other.

The man wearing long pants appears to be angry and complaining that the man with the tattoos on his legs was talking loudly beforehand.

The threats bounce back and forth until a third man arrives and the men start punching one another.

The video was cut abruptly soon after.

Another video taken after the fight was also posted to District Singapore's Facebook page.

In this video, two men are showing their injuries on camera.

One of the men even has a bloody nose.

In response to a Stomp query, the police said they were alerted to the fight at 10.50pm.

"Three men, aged 29 and 44, were subsequently arrested for affray," said the police.