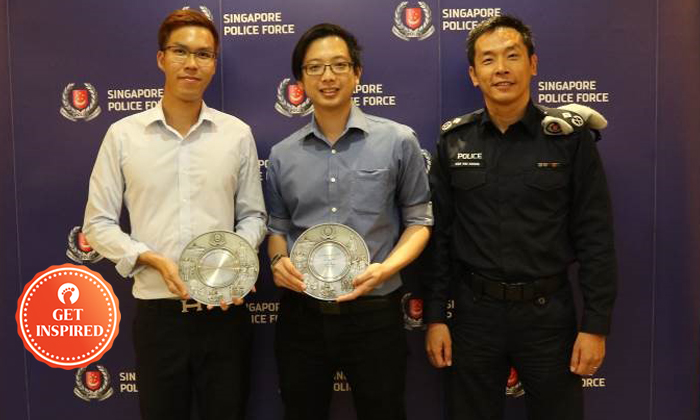 Four members of the public have been lauded for their assistance in a case of molest and a case of public nuisance where two men were arrested.

The first case of insulting the modesty of a woman and public nuisance took place on July 2 at around 6.30pm.

Ms Tan and Mr Leow were on an escalator at Tampines MRT Station when they noticed a 51-year-old man standing behind a woman and placing his mobile phone underneath her skirt.

Ms Tan alerted the victim while Mr Leow tried to detain the suspect, who was uncooperative.

Noticing a commotion, Mr Song then stepped up to render his assistance and helped to detain the suspect.

Officers from the Public Transport Security Command conducted checks on the suspect and found upskirt videos in his phone.

In the second case of public nuisance that occurred on July 19 at about 7.25pm, Mr Law was travelling on an escalator at Marymount MRT Station when he noticed a 46-year-old man standing closely behind a woman.

The man was also seen placing his phone near the woman's legs.

Mr Law informed the victim and detained the suspect.

Upskirt photos were discovered in the suspect's phone after officers from the Public Transport Security Command conducted checks on him.

Commending the four members of the public, Assistant Commissioner (AC) of Police and Commander of Public Transport Security Command Koh Wei Keong said: "Commuters are advised to be vigilant to their surroundings when travelling in public transport.

"Besides being able to prevent themselves from becoming victims of crime, they can also help to keep the public transport system safe by becoming our eyes and ears on the ground.

"The police are thankful to the recipients for their display of public spiritedness. Such acts go a long way to help deter crime on the public transport network."