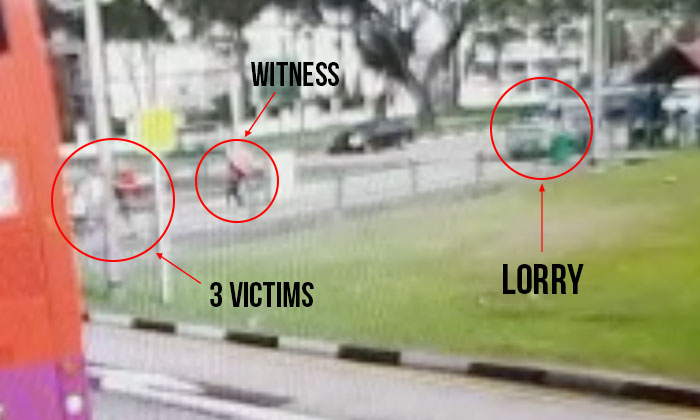 Another video of an accident that happened yesterday (April 23) at about 9.36am near Yio Chu Kang MRT Station along Ang Mo Kio Avenue 6, in which a lorry ploughed through three victims and killed them, has surfaced online.

This is the second video of the accident that Stomp had been alerted to.

The first video which was shared by Stomper Lee yesterday, was taken on her dashboard camera and showed the lorry overtaking her car, before suddenly veering towards the left and crashing into the victims.

In the new video which shows the accident from a different perspective, the three victims -- a man in a wheelchair being pushed by a woman, and another man in a red shirt -- are seen walking from a bus stop nearby towards a traffic junction, while a pedestrian waits near a traffic light.

The lorry is then seen hurtling towards the victims.

It crashes into the victims, sends them flying to the side of the road. 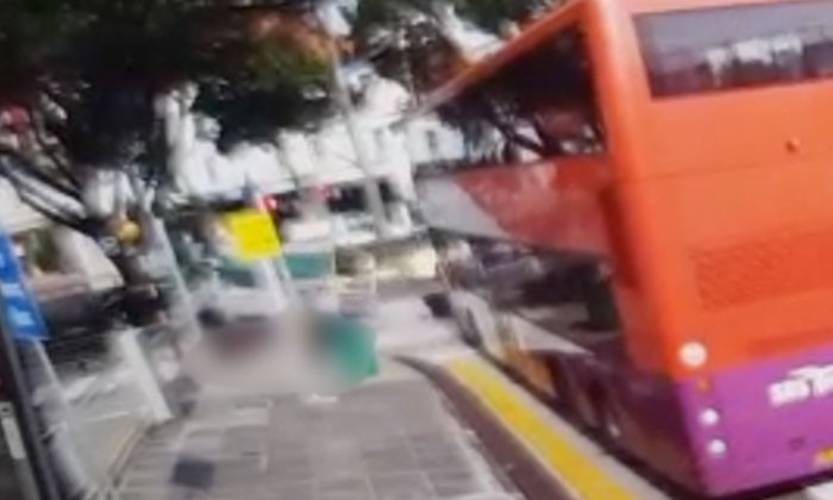 It also hits a double-decker bus, barely missing the pedestrian who witnesses the entire incident.

According to Lianhe Wanbao, the three victims have been identified as 78-year-old Mr Cai, who was in a wheelchair, his 59-year-old daughter Ms Cai, and another 63-year-old man Mr Ye.

Mr Cai's niece told reporters that he had three daughters, and stayed with Ms Cai, another victim of the accident.

She also added that Mr Ye was a family friend.

The driver of the lorry, a 25-year-old man, was taken to Khoo Teck Puat Hospital for treatment and later arrested for dangerous driving causing death.

First video taken by Stomper Lee (Stomp has censored parts of the video due to its graphic nature):

Videos of the accident aftermath:

Related Stories
3 pedestrians killed after getting hit by lorry near Yio Chu Kang MRT Station, driver arrested
Video from Stomper shows moment when lorry fatally hit 3 pedestrians near YCK MRT Station
NUS student who died in Clementi crash was only child: "She is my source of joy"
More About:
accident
death
tragic