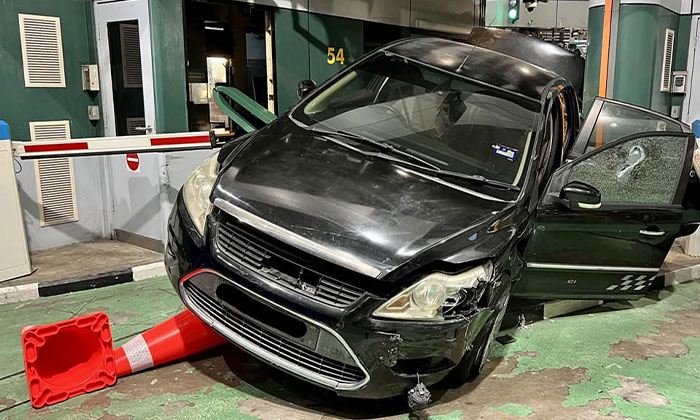 Three people said to be involved in a high-speed car chase across the Second Link were hauled up to court on Saturday morning (April 9).

Being pursued by Malaysian police, they allegedly tried to crash their car through automated motorcycle clearance lanes at Tuas Checkpoint and injured an Immigration and Checkpoints Authority (ICA) officer in the process.

The alleged passengers, Vietnamese Ho Thi My Nhung, 31, and Chinese national Chen Songqing, 35, were each charged with one count of criminal trespass.

All three attended the court session via video link, with Chen doing so from hospital.

They will return to court at a later date.

The police said in a statement on Saturday that a Malaysia-registered car being pursued by the Malaysian police evaded departure clearance at Malaysian customs and entered Singapore via Tuas Checkpoint.

Teo, the driver, allegedly attempted to force his way into Singapore through the automated motorcycle clearance lanes, but the car could not fit and crashed into the counters.

Court documents said that at around 2.20am on Friday, Teo allegedly reversed his car at Tuas Checkpoint and collided into an ICA officer.

ICA officers detained the driver, but the passengers purportedly got out of the car and attempted to escape, but were eventually caught.

Preliminary investigations revealed that Teo was wanted by the police and the Central Narcotics Bureau. He tested positive for drug consumption after a urine test.

According to court documents, Teo had conspired with Singaporean Er Lin Cheng and an unknown contact from Malaysia to import about 33g of methamphetamine across Woodlands Checkpoint in 2016.

On 8 Apr 2022, ICA has detained two men and one woman for failing to stop for arrival immigration clearance at Tuas...

It added that Teo was convicted of trafficking ketamine in 2007 and was jailed for five years and given five strokes of the cane and hence is liable for an enhanced punishment.

If found guilty, Teo could face up to two years' jail and a fine of up to $10,000 for dangerous driving causing hurt, and up to 30 years' jail and 15 strokes of the cane for drug trafficking.

Ho and Chen could each be jailed for up to three months and fined up to $1,500.