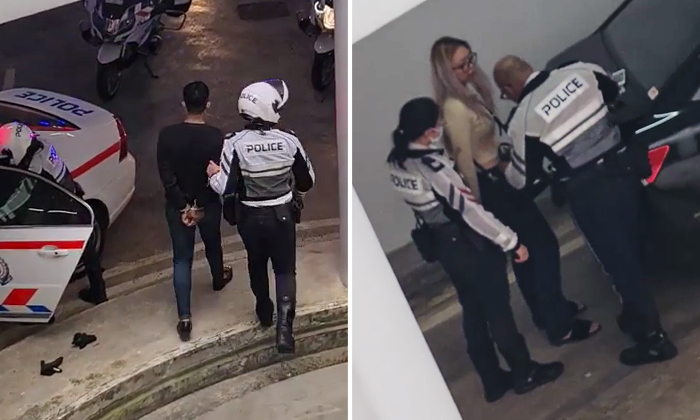 One woman and two men were arrested for the alleged possession of offensive weapons and suspected drug-related offences following a police chase in Sengkang on Sunday (Jan 17).

In response to a Stomp query, a police spokesman said the Traffic Police were patrolling along Fernvale Road towards Sengkang West at 3.48pm when they signalled a male driver to stop his car along the roadside to conduct a check.

However, the driver sped off.

"The officers gave chase and the pursuit came to a halt when the car crashed into a stationary police vehicle that was blocking the car’s path to the exit of Block 313 Anchorvale Road’s multi-storey carpark," police added.

"One female and two male passengers, aged between 16 and 31, were arrested for alleged possession of offensive weapons and suspected drug-related offences."

Several videos circulating on Facebook show two of the suspects, a man and a woman, in handcuffs at the multi-storey carpark.

Police officers can also be seen searching a black car.