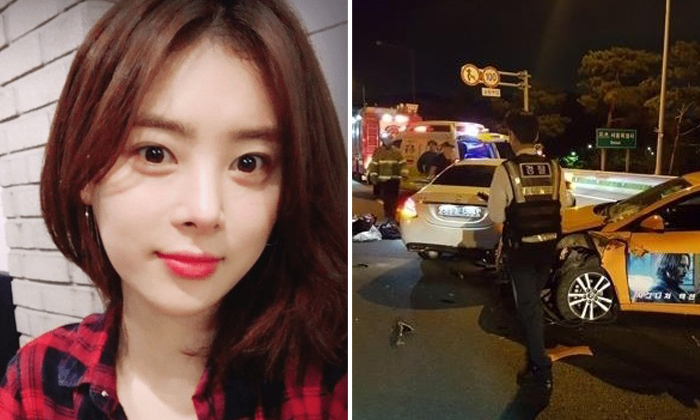 South Korean actress Han Ji-seong died in the early hours of Monday (May 6) after exiting from her Mercedes on Incheon Airport Expressway and getting hit by two vehicles.

Gimpo police said that the 28-year-old victim was known for her roles in local TV drama series but did not name her, though she was later identified by media.

Video footage retrieved by police from the dashcam in Han's Mercedes-Benz C200 shows her stopping in the middle lane of the Seoul-bound three-way expressway with the hazard lights on.

According to entertainment news site Soompi, Han had stopped because her husband needed a bathroom break.

"A taxi on the third lane saw her husband come out of the car and quickly tried to change lanes, leading them to drive into Han Ji-seong, who was standing outside of her car," reported Soompi.

"She fell near the first lane, and a sports utility vehicle (SUV) drove into her for the second time."

The actress died from head injuries while being taken to a nearby hospital in an ambulance.

An autopsy will be carried out on the deceased.

The taxi and SUV drivers have been booked without detention on charges of death resulting from a traffic accident, reported The Straits Times.

Police are also investigating why the actress had come to a stop in the middle lane instead of pulling over on the side of the road, and why she had stepped out of the car in the first place. They are looking into whether she had been under the influence of alcohol at the time.

Han's husband, who is reportedly a lawyer, said he dashed across the road to relieve himself in the woods and learnt of the accident only when he returned.

He told the police that he did not know why Han, whom he married just two months ago, did not pull over on the road shoulder for safety reasons.

However, footage from another car obtained by broadcaster YTN seems to contradict his statement.

According to The Straits Times, the video shows Han was already out of the car before he ran across the road, and that the accident occurred just 10 seconds from the time he got to the guard rail.

That short span of time and the noise from the accident beg the question of why Han's husband said he was unaware of the tragedy until he came back to the site.

He later admitted that he had consumed alcohol with some friends on the day of the incident, but said he did not see his wife drinking.

A source close to the deceased was quoted as saying: "Actress Han Ji-seong has left our side after an unfortunate accident.

"She was a great actress full of passion for acting. She was an actress with a bright future, and it is unfortunate that she passed away so suddenly.

"Her family set up her mortuary with their hearts filled with deep sadness."

View more photos of Han in the gallery.