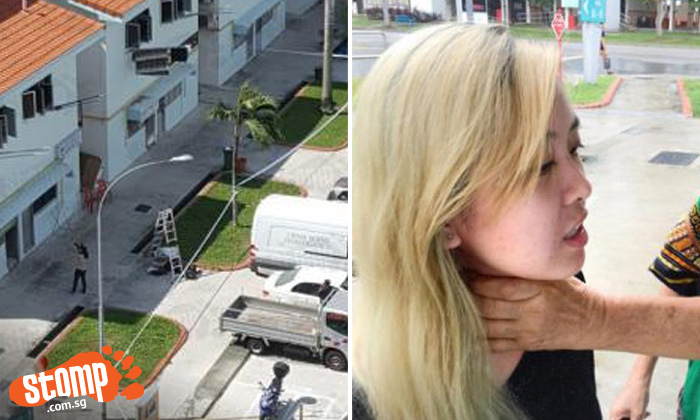 A young woman woke up in the middle of the night on Sunday (Jul 24) to see a stranger in her bedroom at her Block 8 Eunos Crescent flat.

When he saw that the 27-year-old woman had seen him, the man choked her and hit her on the face.

A Stomper saw Criminial Investigaton Department (CID) officers at the block's carpark at 11am that day.

He noted that most of the officers were in the shophouse and that there was a Crime Scene Investigation van parked at the scene.

A police spokesperson informed Stomp that a 28-year-old man was arrested and is currently assisting with investigations.

He was caught after he answered a call made to the stolen phone.

According to Shin Min Daily News via AsiaOne, the man had broken in by climbing up from the first floor and entering the second storey flat through a window which had no grilles.

The woman, who lives with her 76-year-old grandmother, suffered injuries and scratches on her face and was hospitalised.

She reportedly lost her credit card and mobile phone. He is also alleged to haven taken $500 cash from the elderly woman's purse.

Her grandmother was apparently sound asleep throughout the incident and only realised what happened when the police showed up.