27 years' jail for parents of boy who was scalded with hot water, confined in cage before his death 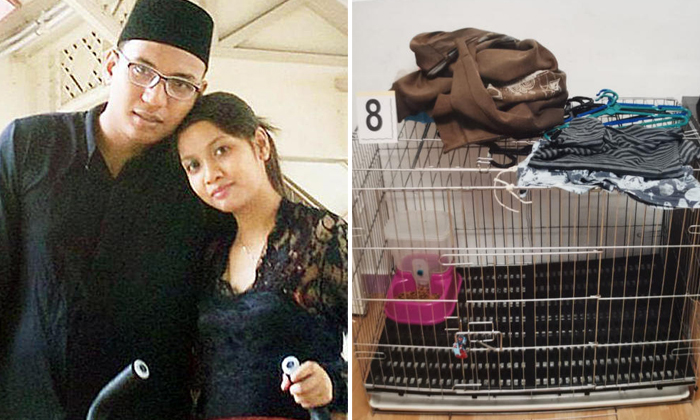 In what prosecutors described as "one of the worst cases of child abuse", a couple who repeatedly splashed hot water on their five-year-son until the boy died from his scald injuries were sentenced to jail on Monday (July 13) by the High Court.

Ridzuan Mega Abdul Rahman, 28, was given 27 years' jail and 24 strokes of the cane, while his wife, Azlin Arujunah, 28, was also sentenced to 27 years' jail, with an additional one-year term in lieu of caning.

The couple had splashed hot water on the boy on four occasions between Oct 15 and Oct 22, 2016, at their one-room flat in Toa Payoh, and took him to hospital some seven hours after he collapsed following the last incident.

He died from horrific scald injuries, covering about 75 per cent of his body, on Oct 23.

The pair also committed other acts of abuse against the boy, including confining him to a pet cage, pinching him with a pair of pliers, hitting him with a broom and burning his palm with a heated spoon.

In sentencing, Justice Valerie Thean said the cage incident was "extremely cruel", given the exposed wiring of the cage - which measured 91cm long, 58cm wide and 70cm tall - and its relative size to the 1.05m-tall boy.

The pair, who were unemployed and have other children, were originally charged for murder with common intention to inflict fatal scald injuries on the boy.

The boy and his siblings cannot be identified due to a gag order.

In April, Justice Thean found that common intention had not been sufficiently proved and asked the prosecution to file alternative charges for the acts of scalding.

In June, the judge formally acquitted the pair of murder and instead convicted them of causing grievous hurt by dangerous means for the acts of scalding.

On Monday, prosecutors sought the maximum life imprisonment terms for Azlin and Ridzuan.

Deputy Public Prosecutor Tan Wen Hsien argued that the boy was in pain for a week and "suffering a fate worse than death", but the pair persisted in abusing him instead of seeking medical attention.

Even after the boy was taken to hospital, the pair lied that the injuries were self-inflicted, said the DPP.

However, Justice Thean did not think life imprisonment was appropriate, considering the precedents and the facts of the present case.

"A central aspect of the medical evidence in this case was that it could not be determined with precision which injuries arose from which of the incidents," said the judge.

The judge rejected alternative recommendations by the prosecution that Azlin should get a heavier sentence because she initiated two of the scalding incidents.

Both were equally responsible, said the judge.

"It was Ridzuan who introduced a culture of family violence into this family and home, through his initial abuse of Azlin. It was also Ridzuan who first started the violence against the child in July, with pliers," she said.

Being stronger, Ridzuan's acts of abuse also caused greater injury, such as an incident in which he punched the boy and caused a nose fracture.

The judge added that the repeated omission to seek medical attention was a joint parental decision.

Justice Thean added that the couple's attempt to argue that were living in challenging circumstances made a "mockery" of the facts.

She noted that a family friend had helped take care of the boy and was willing to look after him.

She shed light on why the boy, who was fostered out shortly after his birth and lived with another family until he was four, was returned to the couple in 2015.

The judge said that the friend, who had children of her own, had asked the couple to sign a consent form to change the boy's pre-school to one near her home.

The friend had also offered to be the boy's guardian.

"Despite their parental obligation to look to the best interest of their child, neither parent would even sign the consent form for a change of school," said the judge.

The boy did not attend pre-school after he was returned to his parents, she added.

The prosecution has since filed an appeal against the murder acquittal.

Related Stories
Couple charged with son's murder: Mum was dealing with family deaths and husband's affair
Parents on trial for son’s murder: Mother says she was abused as a child and also by her husband
Man in murder trial burned son's palm with heated spoon to punish him for "thieving hands"
Couple charged with son's murder: Scalded 5-year-old had dirty wounds with "a lot of black debris"
Woman accused of murdering 5-year-old son: 'How can I kill a child? Look at my small body'
5-year-old was "running for his life" when parents splashed hot water on him: Forensic pathologist
Couple charged with murder: 5-year-old pinched with pliers, kept in cat cage, had burns on 70% of body
More About:
court
abuse
child abuse
child
death
dead
couple