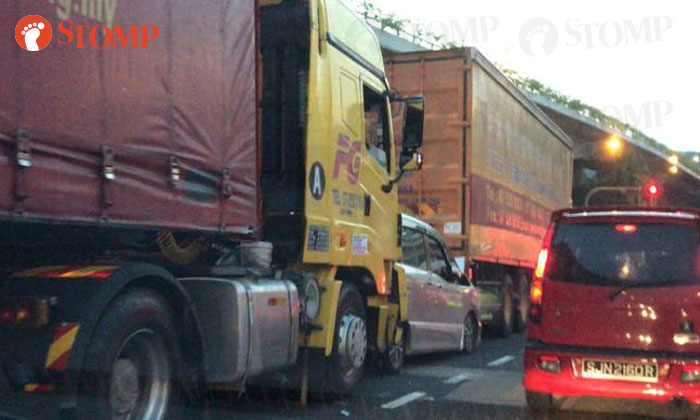 Twenty-six people were taken to hospital after an accident involving several vehicles occurred near Woodlands Checkpoint today (Dec 20) at around 6am.

Stomper Ching Hui passed by the scene of the accident as he was driving into Singapore from Johor Bahru this morning.

"The accident caused a jam as the left-lane was closed," said the Stomper. "However, it was soon cleared by officers who redirected traffic".

A police spokesman said the police were alerted to an accident involving two trailers, a bus and a car along 21 Woodlands Crossing today at 6.14am.

In response to Stomp media queries, a Singapore Civil Defence Force (SCDF) spokesman said that they were alerted to the accident at Woodlands Crossing at about 6.10am and that 26 people were taken to hospital.

Related Stories
Lorry lies on its side after accident with BMW at Ang Mo Kio Avenue 5
Man flees and abandons car after crashing into drain near Geylang, was heard cursing
Car crashes into railing after allegedly racing along PIE in wee hours
More About:
accident
chain collision
injured