2.5m python pees while getting caught in Spooner Road flat 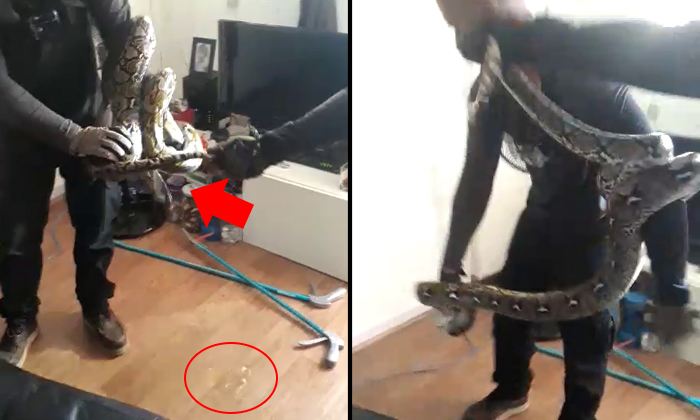 A large python was caught in an HDB flat at 2 Spooner Road, near the Jalan Bukit Merah area, last Thursday (July 12).

Several Stompers shared with Stomp a video of the incident, which started circulating on WhatsApp over the weekend.

The video shows two men, identified as handlers from the Agri-Food and Veterinary Authority (AVA), trying to catch the snake in the living room of the flat.

As the men held up the reptile, it responded by peeing on the floor.

A man in the background can be heard saying, "Aiyo, urinate, urinate, alamak!" while another woman exclaimed: "Alamak, urine my floor!"

Responding to a Stomp query, AVA said it removed the snake from the flat after being alerted to the case, and handed it over to Wildlife Reserves Singapore.

A spokesman added: "AVA advises the public not to approach, disturb, feed or try to catch any wildlife, including snakes.

"Keep a safe distance from the animals and avoid confronting or cornering them. Do not interact with the animals, and ensure that young children and pets are kept away from them."