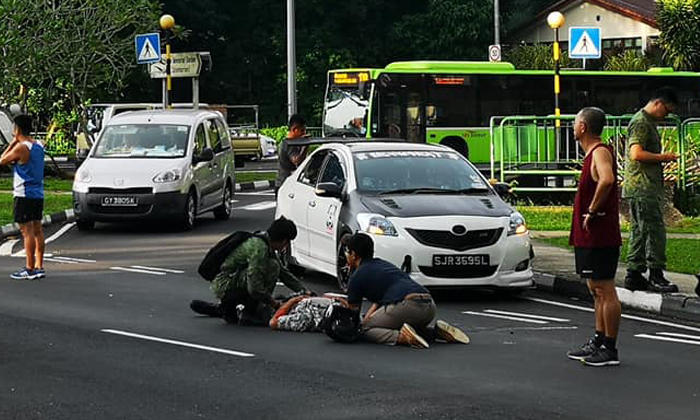 A 25-year-old motorcyclist was taken to hospital after an accident along Sembawang Road, towards Mandai Road, on Thursday morning (Nov 21).

In response to a Stomp query, the police said they were alerted to the accident involving a motorcycle at 7.47am.

Stomp understands that the motorcyclist had self-skidded.

He was conscious when taken to Khoo Teck Puat Hospital.

Facebook user Richard Toh, who posted photos of the incident, said: "Army boy on motorbike down with facial injuries and bleeding arms."

"He was conscious and seemed able to communicate with those who offered help."

In the photos, a man can be seen lying on the road as two others attended to him. Several men in army uniform and passers-by can also be spotted at the scene.

The pictures also show a motorcycle helmet on the pavement while the motorcycle lay on the road.