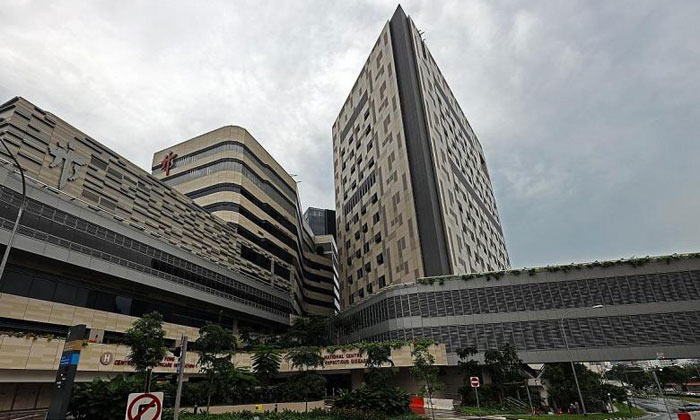 On three occasions, he headbutted a nurse, spat at and kicked a police officer, and threw a slipper and a chair at two other officers while being held at a police station.

The unemployed man also breached a Personal Protection Order (PPO) taken against him by his 71-year-old mother.

For these offences, Goh Tong Chien, 25, was yesterday jailed eight months and a week.

Goh, who has been in remand since Jan 16, pleaded guilty to six charges, with another seven taken into consideration.

The first incident happened in April last year when Goh was warded at Tan Tock Seng Hospital for drug intoxication.

After his request to go for a smoke was rejected, Goh got agitated when nurse Wong Seng Loong approached to help him as Goh had a high fall risk but was standing by his bed.

Goh punched the nurse but was subdued and put back in his bed. While the victim was putting restraints on him, Goh sat up and headbutted him, causing bruises and abrasions.

In the second incident last September, Goh made a scene at a 7-Eleven store in Bras Basah and was arrested after a slab of 10 white pills was found in his jeans pocket.

Goh refused to put his feet inside the police car and kicked wildly when Staff Sergeant Mohamed Rosli Mohamed tried to lift them up.

Goh was pinned down but kicked the police officer in the face.

On Jan 13, Goh was arrested again, for disorderly behaviour, and taken to Bedok Police Division.

About 25 minutes later, as he was being taken to the lock-up, Goh threw a chair at Senior Staff Sergeant Anwar Zainal, but SC Sgt Syaakir was able to catch it.

Two days later, while out on bail, he breached the PPO his mother had taken out against him when he smashed an umbrella on the ground after she said she did not have $10 to give him.

In 2015, he was jailed 22 months and caned three times for punching his aunt and slashing a cabby with a chopper.