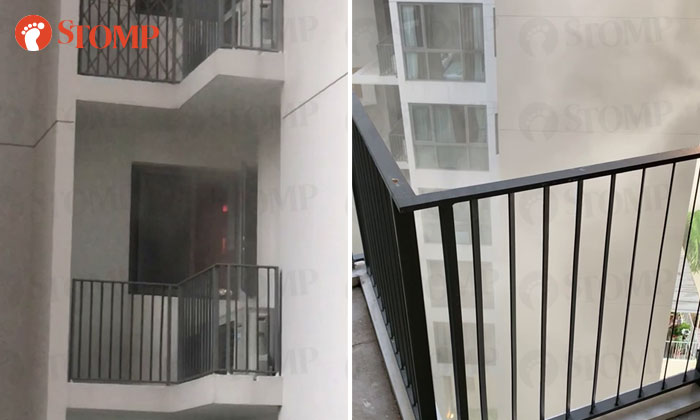 About 25 people were evacuated after a fire broke out in a unit at the Riversails condominium at Upper Serangoon Crescent on Tuesday evening (Apr 13).

A Stomper alerted Stomp to the incident and shared a video of smoke rising from the affected unit.

In response to a Stomp query, the Singapore Civil Defence Force (SCDF) said they were alerted to a fire at 4 Upper Serangoon Crescent at 6.40pm.

"The fire, which involved a fridge in the kitchen of a unit on the sixth floor, was extinguished by members of the public using a hosereel and a fire extinguisher prior to SCDF's arrival," an SCDF spokesman said.

"About 25 people evacuated prior to the arrival of SCDF."

According to the Stomper, who is also a resident at the condominium, this is not the first time a fridge fire has happened there.

The last reported fire was on Mar 27.

"The management is not taking serious action towards the fridge defect," he said.

Related Stories
Members of public extinguish fire that broke out at carpark of Bank of China Building at Battery Road
Fire breaks out in kitchen at Tampines East Community Club
1 taken to hospital after PAB bursts into flames at Fernvale Lane
More About:
fire
condominium
scdf