$2.4k fine for lingerie-sniffer who sexually stimulated himself in public, posted obscene pics on Instagram 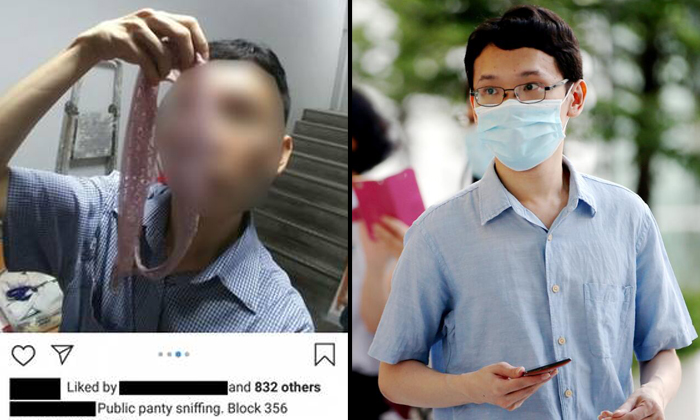 After sexually stimulating himself in public over a pair of shorts, a 35-year-old man took photos of the garment.

He then uploaded the photos onto his Instagram account, which resulted in at least 38 police reports being lodged against him.

On Friday (Sept 18), Lim Wei Ming was fined $2,400 after pleading guilty to one count of causing public nuisance by posting the photos and one count of possessing four obscene video clips on his mobile phone.

Two other charges involving Instagram posts of Lim sniffing female undergarments and one count of sending four obscene video clips to another individual were taken into consideration by District Judge Tan Jen Tse.

The court heard that Lim, who is currently unemployed, committed his offences last year. He was a Grab driver then.

It was earlier reported that he was arrested on Aug 16 last year, after the posts of him sniffing lingerie started circulating online a day earlier.

Court documents state that sometime in 2018, Lim came across a black pair of shorts that was hanging on a clothing rack in the vicinity of Choa Chu Kang Street 51.

He sexually stimulated himself over the garment before taking photos of it.

Lim then placed the shorts back on the clothing rack and left.

On Aug 14 last year, he posted the photos of the shorts on his Instagram account with a caption stating his lewd deed and the location where he had committed it.

Lim deleted the photos soon after receiving complaints from other Instagram users.

Deputy Public Prosecutor Sean Teh told the court that Lim was found by the Institute of Mental Health (IMH) to have a fetish concerning female clothes, with a preference for female intimate wear.

Urging the court to impose a $5,000 fine on Lim, the DPP said that Lim's Instagram post had caused a "significant amount of annoyance" to the public, with 38 police reports being lodged against him on the I-witness online platform.

Defence lawyer David Nayar said in mitigation that Lim has been undergoing psychiatric sessions at IMH to address his fetish.

In imposing a $2,400 fine on Lim, District Judge Tan noted that he had been in remand between August and September last year for his case.

For his offence of causing public nuisance, he could have been fined up to $1,000.

He could also be jailed up to 12 months and/or fined up to $40,000 for possessing the four obscene films.