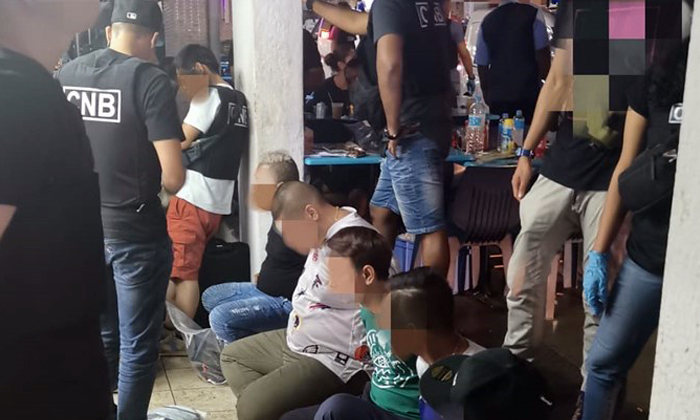 A total of 24 suspected drug offenders, aged between 24 and 60, were arrested by the Central Narcotics Bureau (CNB) at multiple locations on Tuesday evening (July 16).

Some of the suspects were believed to be involved in "distributing sizeable quantities of new psychoactive substances (NPS)" in Geylang, said the CNB..

According to a statement by the CNB, officers had swooped in onto the vicinity of Geylang Lorong 10 and caught 19 suspected drug offenders shortly after 8pm on Tuesday.

Among them were two Singaporean male suspected drug traffickers, aged 38 and 49.

About 1,804g of vegetable matter containing NPS was also recovered.

Concurrently, another party of CNB officers raided a unit in the vicinity of Cassia Crescent.

Another three Singaporean men were subsequently nabbed at two different locations – a 46-year-old along Ang Mo Kio Avenue 1, as well as a 42-year-old and 46-year-old in Odeon Katong.

All three are suspected to be associated with the 54-year-old men arrested in Cassia Crescent.

Investigations into the drug activities of the suspects are ongoing.

The CNB also said that it "maintains a zero-tolerance stance towards drugs and will not hesitate to take action against NPS activities".

NPS, also known colloquially as ‘mushroom’, are substances that mimic the effects of other Class A controlled drugs, such as cannabis, cocaine and ‘Ecstasy’, and are produced by introducing slight modifications to the chemical structures of controlled drugs.

Their abuse has been linked to adverse physical and psychological reactions, including paranoia, seizures, hallucinations and even death.

The consumption, possession, trafficking, import or export of any controlled drugs is an offence under the Misuse of Drugs Act.

Any person found guilty of trafficking Class A controlled drugs will face at least five years in jail and five strokes of the cane. They will also be liable for enhanced penalties if they re-offend or sell to young or vulnerable persons.