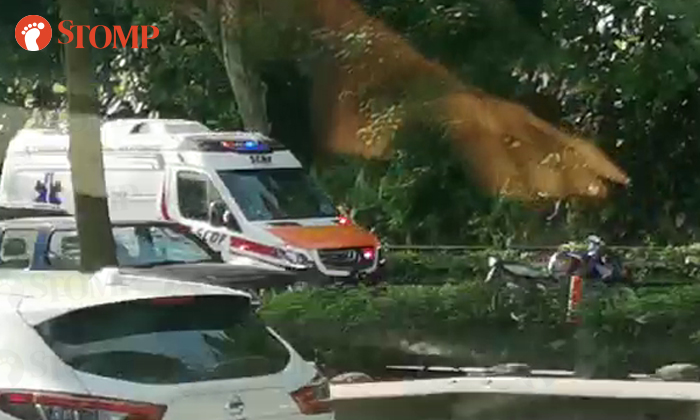 A motorcyclist was taken to the hospital on Friday morning (June 28) after he was involved in an accident with a car at Seletar Expressway (SLE).

Stomper Lim alerted Stomp to the accident and shared a video of the scene.

The video shows a red car parked along the side of a road. A short distance behind the car, a motorcycle and an ambulance can also be seen.

Lim told Stomp that he saw the driver of the red car come out and walk towards the motorcycle.

In response to a Stomp query, the Singapore Civil Defence Force (SCDF) said they responded to a road traffic accident along SLE towards Bukit Timah Expressway, before Exit 11 at about 8.40am.

A police spokesman told Stomp: "The police were alerted to an accident involving a car and a motorcycle.

"The motorcyclist, a 23-year-old man, was conscious when conveyed to Khoo Teck Puat Hospital.