23-year-old food deliveryman hit by car at Jurong West junction: 'He was screaming in pain' 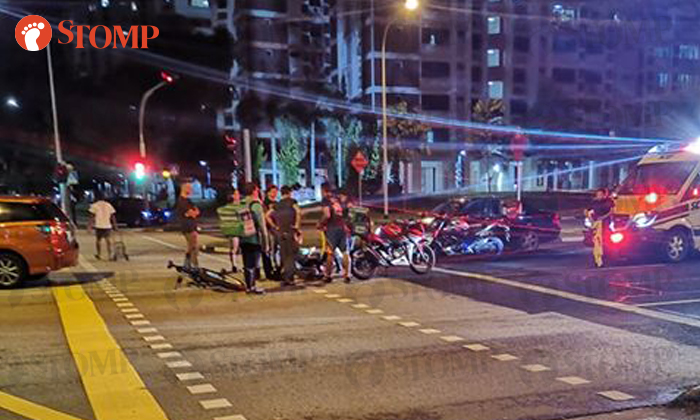 A 23-year-old motorcyclist was taken to hospital after he was allegedly hit by a car in Jurong West on Friday night (Jan 10).

In response to a Stomp query, the police said they were alerted to the accident at the junction of Jurong West Ave 4 and Jurong West Street 72 at 8.38pm.

The motorcyclist was conscious when taken to Ng Teng Fong General Hospital.

Stomper Satria, who witnessed the accident, identified the victim as a GrabFood deliveryman.

Satria recounted: "I had just finished delivering my order nearby and was crossing the T-junction.

"When I reached the other side of the road, the motorcyclist who had been waiting for me to cross before turning got sideswiped by a car.

"I immediately rushed over to him. He was screaming in pain and said he could not feel his hand.

"The driver came out of his car to take photos and kept saying that it was not his fault."

Photos that the Stomper submitted show several men at the accident scene.