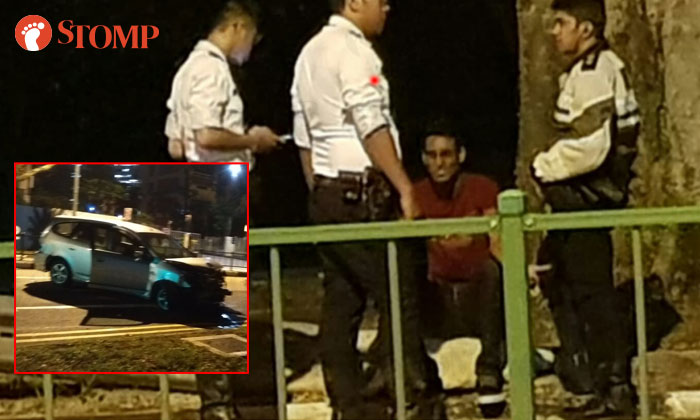 A 23-year-old man was arrested for suspected drink-driving after crashing his car at Hougang Avenue 7 on Sunday (July 29) at about 1am.

The driver had crashed into guard railings causing the front of the car to be damaged.

Stomper Cheers was walking past the area where the incident happened at about 2am and shared photos and a video of it with Stomp.

Cheers said that the man had "run away" from his vehicle.

However, he eventually returned to it and was promptly arrested by police at the scene.

Stomp understands that when the police arrived, the car had been abandoned and that the driver had allegedly asked his brother to cover for him.

However, the driver, who was wearing a red T-shirt, eventually returned to his vehicle and was arrested by the police.

In response to a Stomp media query, a police spokesman said that the police were alerted to the incident at 1.03am.

"No injuries were reported," said the spokesman.

"The car driver, a 23-year-old man, was arrested for suspected drink driving."