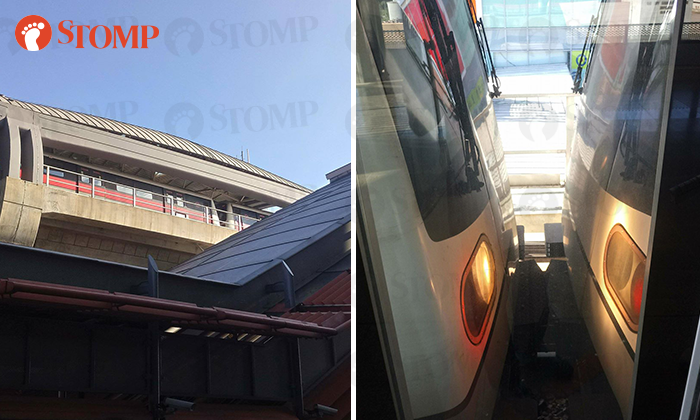 The number of injured has risen to 36, after 7 more sought treatment at Ng Teng Fong General Hospital and National University Hospital (NUH).

A statement released by the Land Transport Authority (LTA) at 4.14pm read:

"There were 28 injuries in total, including three walk-ins at Ng Teng Fong General Hospital later in the afternoon.

"The Ministry of Transport, Land Transport Authority (LTA) and SMRT are in touch with these injured passengers to offer the necessary assistance.

"Out of the 15 sent to the National University Hospital, one declined treatment and returned home, and 13 received treatment and have been discharged. One passenger is currently warded for observation.

"A total of 13 injured (including three walk-ins) were treated at Ng Teng Fong General Hospital. Nine have been treated and discharged, two are being treated, and two others are warded for observation."

A spokesman from Ng Teng Fong General Hospital said that two patients sustained injuries under the P2 category, or 'major emergencies', such as limb fractures and joint dislocation.

The rest of the victims sustained relatively minor injuries, such as sprains.

An SMRT train hit the back of another stationary train at Joo Koon MRT Station during the morning peak hours on Wednesday (Nov 15).

Stomper Ganeshan, who usually alights at Joo Koon station to transit to a train travelling to Tuas Link, told Stomp in a phone interview that he had witnessed the incident.

He said: "I alighted at Joo Koon station at around 7.45am. Not all the trains go to Tuas Link, so usually I will have to switch between trains."

After Ganeshan alighted the train, another oncoming train hit the rear of the train which he was on.

"There was a loud bang, and some commuters even screamed. I was shocked.

"I saw the second train coming in from a distance, but I thought it was going to slow down."

Ganeshan went closer to take a look and quickly took some photos which he sent to Stomp, before going off to work at 9.05am.

Stomper Azli was one of the passengers in the train which hit the rear end of the stationary train.

Azli was in the last cabin of the train at the time of the incident.

“I was on the train heading to Joo Koon when the train came to a sudden stop, and there was a loud bang.

"The impact (of the trains hitting each other) was quite strong.

“All passengers were thrown forward including me.

“I was scratched on my left hand though it’s not that serious.

After the incident, an announcement was made over the systems asking for passengers to move forward to the first cabin.

They were then directed to the operator cabin where they alighted the train.

Stomper John who boarded a train in Jurong East station at 12.23pm said that train services were still operating slower than usual.

“The train stopped at Chinese Garden station for around 2 to 3 minutes and another 5 minutes at Lakeside.

“It took me more than 10 minutes to reach Lakeside.

“Usually the trip between Jurong East and Joo Koon would take 15 minutes, but today, it took 30 minutes.”

In his accompanying caption, Dwie wrote:

The incident allegedly arose due to a  malfunction of the new signalling system, reports The Straits Times.

According to a Facebook post by the Singapore Civil Defence Force (SCDF) at 10.45am, 23 passengers were injured during the incident and were conveyed to hospitals.

A tweet from rail operator SMRT at around 10am read:

A joint statement by SMRT and the Land Transport Authority (LTA) was issued on LTA's Facebook page.

"This morning at 8.18am, a train heading in the direction of Tuas Link Station stalled at Joo Koon Station.

"At 8.19am, a second train stopped behind the first faulty train.

"At 8.20am, the second train moved forward unexpectedly, and came into contact with the first train.

"23 passengers and 2 SMRT staff sustained light to moderate injuries, and have been conveyed to Ng Teng Fong Hospital and National University Hospital.

"SMRT and LTA are investigating the incident."