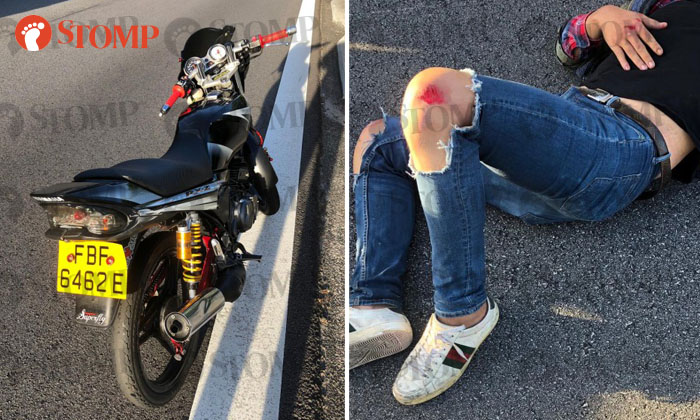 A motorcyclist was arrested for suspected drink driving after he was involved in an accident with a car took along the Seletar Expressway (SLE) towards Bukit Timah Expressway (BKE) on Thursday (Jan 17).

A Stomper sent Stomp pictures of the accident that he received from a friend via WhatsApp.

He said: "My friend sent me the pictures of the injured motorcyclist.

"He was taken to hospital and there is an appeal going around to contact his family."

The Stomper sent us the appeal which read: "Anyone knows this rider? He met with an accident at SLE towards BKE at Upper Thompson Flyover.

"Please help to spread the word to his family."

In response to a Stomp query, the police said: "On Jan 17 at about 8.07am, the police were alerted to an accident involving a car and a motorcycle along the SLE towards BKE.

"The motorcyclist, a 22-year-old man, was conscious when conveyed to Khoo Teck Puat Hospital.

"He was subsequently arrested for suspected drink driving."