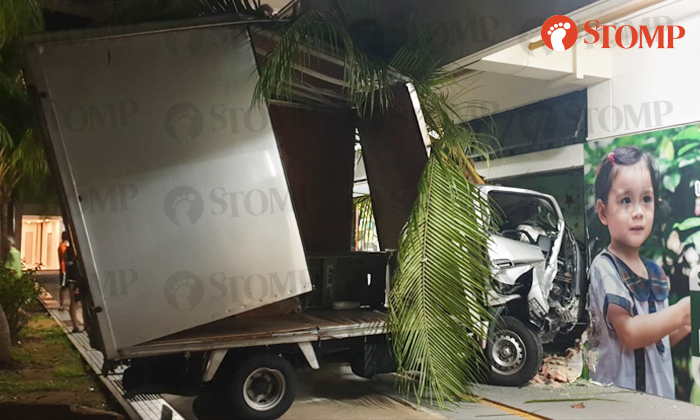 A 22-year-old man was arrested for drink-driving after crashing a lorry into a pre-school at Block 553 Serangoon North Avenue 3 in the early hours of Friday (Oct 11).

The police told Stomp in response to queries that they were alerted to an accident involving a lorry at the service road of the block at 12.47am.

The lorry driver was conscious when taken to Sengkang General Hospital and was subsequently arrested for drink-driving, said a police spokesman.

Stomper Prabhu, who passed by the accident site with his wife at around 1am, contributed photos of the lorry with its front mangled.

The lorry appeared to have surged forward and mounted the kerb, before crashing into the wall of the Little Green House pre-school.

A tree, which was also hit in the accident, can be seen sandwiched between the lorry and the wall.

Prabhu recounted: "My wife and I were visiting my mother-in-law, and we were on the way home when we noticed a commotion.

"A couple at the scene told us that they had seen a group of men sitting under the block and drinking prior to the accident.

"I later went up to the group and asked one of the men if he was the lorry driver. He shook his head and pointed at his friend.

Responding to a Stomp query, a spokesman for Little Green House said it has since informed all parents about the incident and advised them not to send their children to school on Friday.

There are 77 students enrolled in the pre-school.

The spokesman told Stomp in a statement: "We are shocked by the incident which happened in the early morning of Friday. Fortunately, there was no one in the centre at that time.

"The police are investigating this case, and we have since informed all parents about the incident and advised them not to send their children to school today as the affected site is cordoned off for safety reasons.

"Two of our staff members were at the scene since 1am to assist with the investigations."

The spokesman noted that besides the police, representatives from the Town Council, the Housing Development Block, the Early Childhood Development Agency and insurance firm AIG also responded promptly following the incident.

"Our contractor has started to clear the debris and will rectify the defects over the weekend. We aim to resume operations as early as Monday, after ensuring that the premises is safe for our children," added the spokesman.

"We wish to extend our sincere appreciation to all departments for their prompt response, and to all parents for their understanding and cooperation."