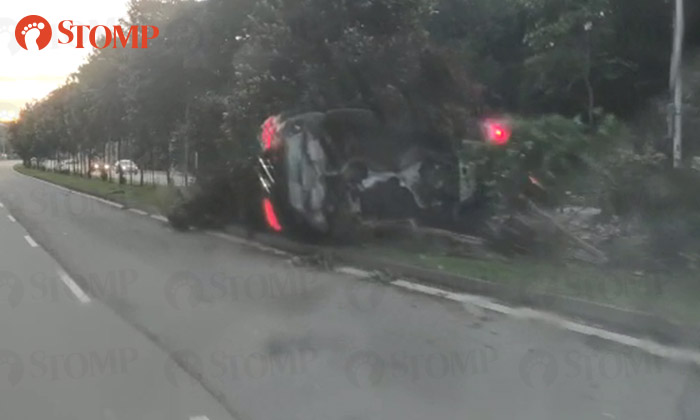 A 21-year-old driver was taken to hospital after his car overturned along West Coast Highway on Sunday morning (Dec 22).

Stomper Don was driving along the highway and going towards Taman Jurong when he saw the aftermath of the accident.

He took a video of the aftermath and told Stomp: "I was there at about 7.20am.

"Didn't see any casualties, probably already taken away by the ambulance you can see in the video."

"A traffic police car was there, so the accident probably occurred earlier than 7.20am."

From Don's video, several trees on the middle road divider can be seen to have fallen.

The driver's car is also lying on its side.

Don added: "This isn't my first time seeing such an accident, so I wasn't that surprised when I saw that the road divider in that condition."

Responding to a Stomp query, the police said: "At 5.45am on Dec 22, the police were alerted to an accident involving a car along West Coast Highway towards Keppel Road.

"The 21-year-old male driver was conscious when conveyed to National University Hospital.